I've been creating digital artwork for over ten years now and still feel as though I've merely scratched the surface of its possibilities. I alter my creations in various applications and print an incredible number of test runs on my fancy (meaning expensive and finicky) Epson Photo Printer. Naturally, I end up with tons of experiments that lead to new ideas. Being a pack rat artist, I can't throw these test images out. That would be both ecologically and artistically wasteful wouldn't it?. By amassing a pile of rejected images, I plan on creating new artworks using collage elements.

I've always loved collage but haven't done all that much in recent years. I had some free time at the beginning of the year and decided to try something new. A haunted face that grew from mirroring one of my digital drawings possessed me.

A friend of mine gave me a pile of old sheet music, one of which was a faded, aged, torn and seductive shade of gray-blue. It had the shape of an upper body. I placed both elements, the face and body, on a 18"x24" paper. I glued them down and drew a bent arm that pointed skywards from the torso using ink on a surface that was slightly dampened.

Something had to land on that pointed finger. It looked like the perfect perch for a bird. I threw a bit of fluid paint on another sheet of paper (à la Jackson Pollock) and blew it about with a straw. While it was drying, I created and cut out a bird stencil that I traced over the ink splashes. I scanned the completed reddish bird and printed up three more black and white versions in slightly altered sizes. 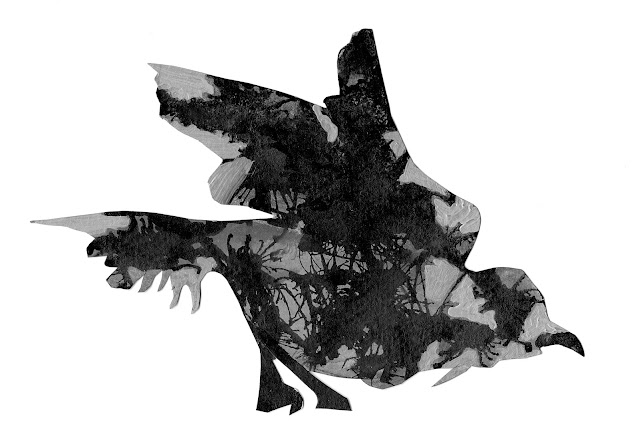 I experimented with the placement of the birds which begged to extend beyond the borders of the paper. That made me smile. Of course they couldn't be confined to an 18"x24" format!
I placed my character within a nest and added more painterly elements. The figure had to keep growing, figuratively and literally. I felt compelled...no obsessed, to create legs for my subject!  The nest reminded me of a ballerina's tutu. 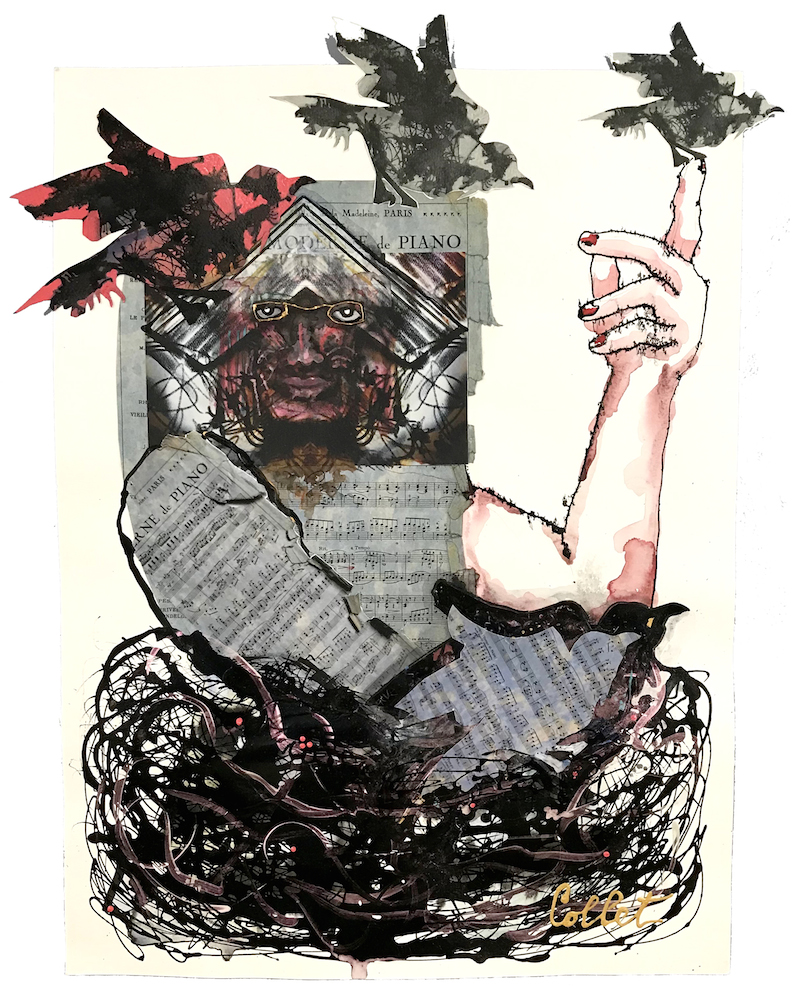 Chirp (Part 2)
Out came another 18"x24" sheet of paper for my next work. I reprinted the music sheet in a slightly different colour to echo the torso of the first image, rotated and glued it on the paper. I drew the legs and a "tutu nest" and giggled all the while as I did it. The lower half needed some pizzazz and in keeping with an avian spirit, I decided to add some hungry baby birds. 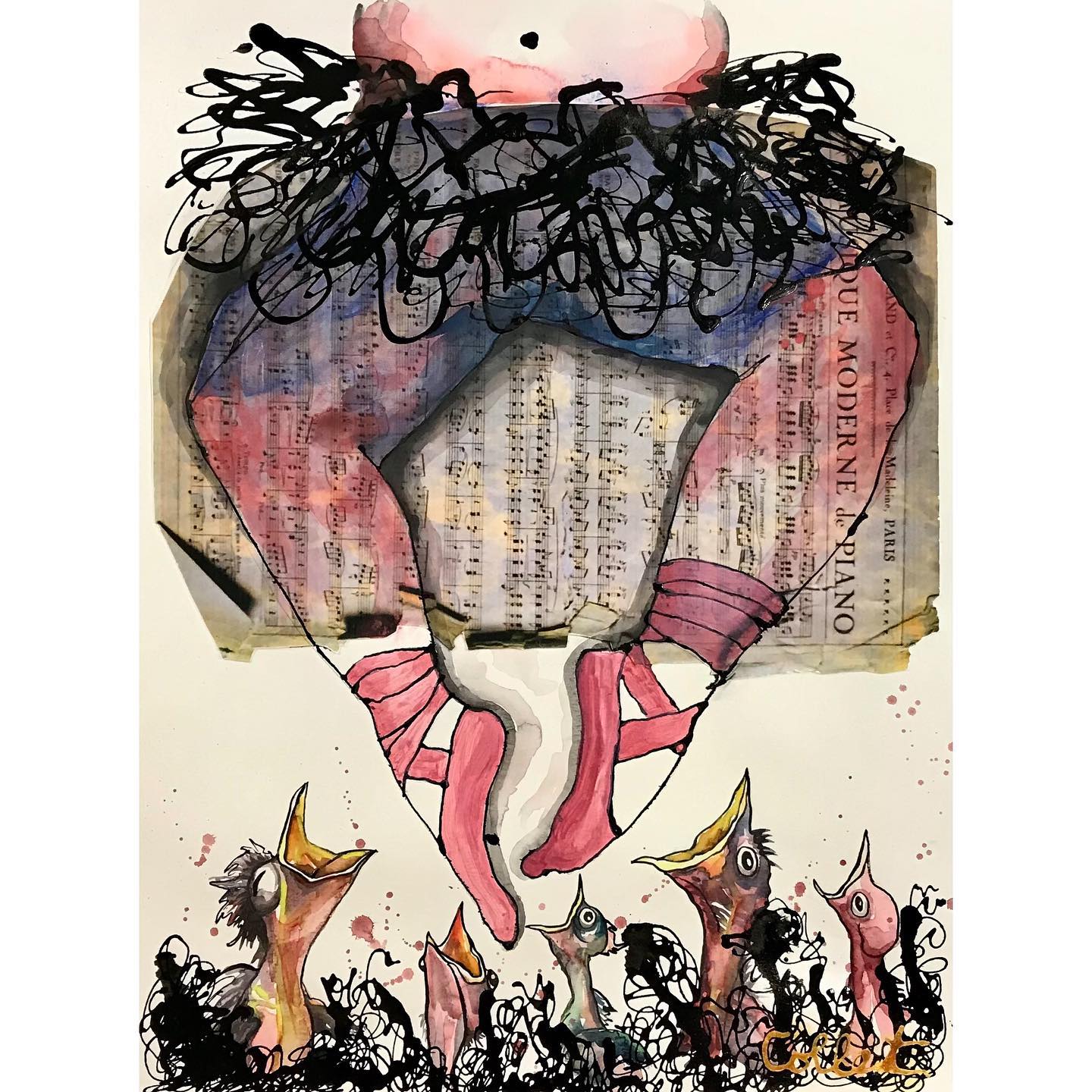 BALLERINO
The more I looked at the two finished works, the more I wanted to combine them. I decided to do so digitally to see what would happen. I loaded up photos of the two images in Procreate on my iPad Pro and fiddled with the elements to merge them. I wanted the connection of both parts to feel a tad uncomfortable.
The nest was way too narrow so I widened it. "Ballerino"...a new digital print, was born. 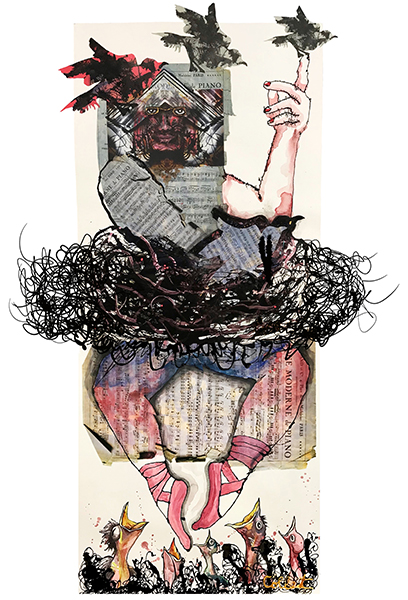 Song and Dance
Russia invaded Ukraine and in concert, a call for entry appeared on Facebook from the Conseil des Arts et de la Culture de Vaudreuil-Soulanges (CACVS) for the 2022 Edition of their Contamination Culturelle outdoor exhibition. This itinerant show has traditionally taken place during the summer months in different municipalities of the region. I decided to continue working with Chirp 1 & 2 and Ballerino.
The work is coloured by what is happening in our world right now. It is nourished by war, a pandemic and a seriously hurting global population. Along with death, there is also birth, renaissance, and the will to survive. The way I understand life is that every dark event has a positive side but the opposite is also true.
For "Song and Dance", I multiplied my character’s legs to suggest movement and added a dark, turbulent sky that hints at an impending storm. Hungry bird babies try to eat the tips of the ballet slippers that hang over their beaks because they resemble worms (an illusion of food). I also added a hatchling in the tutu nest who appears to be squawking "Don't leave me!" to one of the mature birds taking flight. 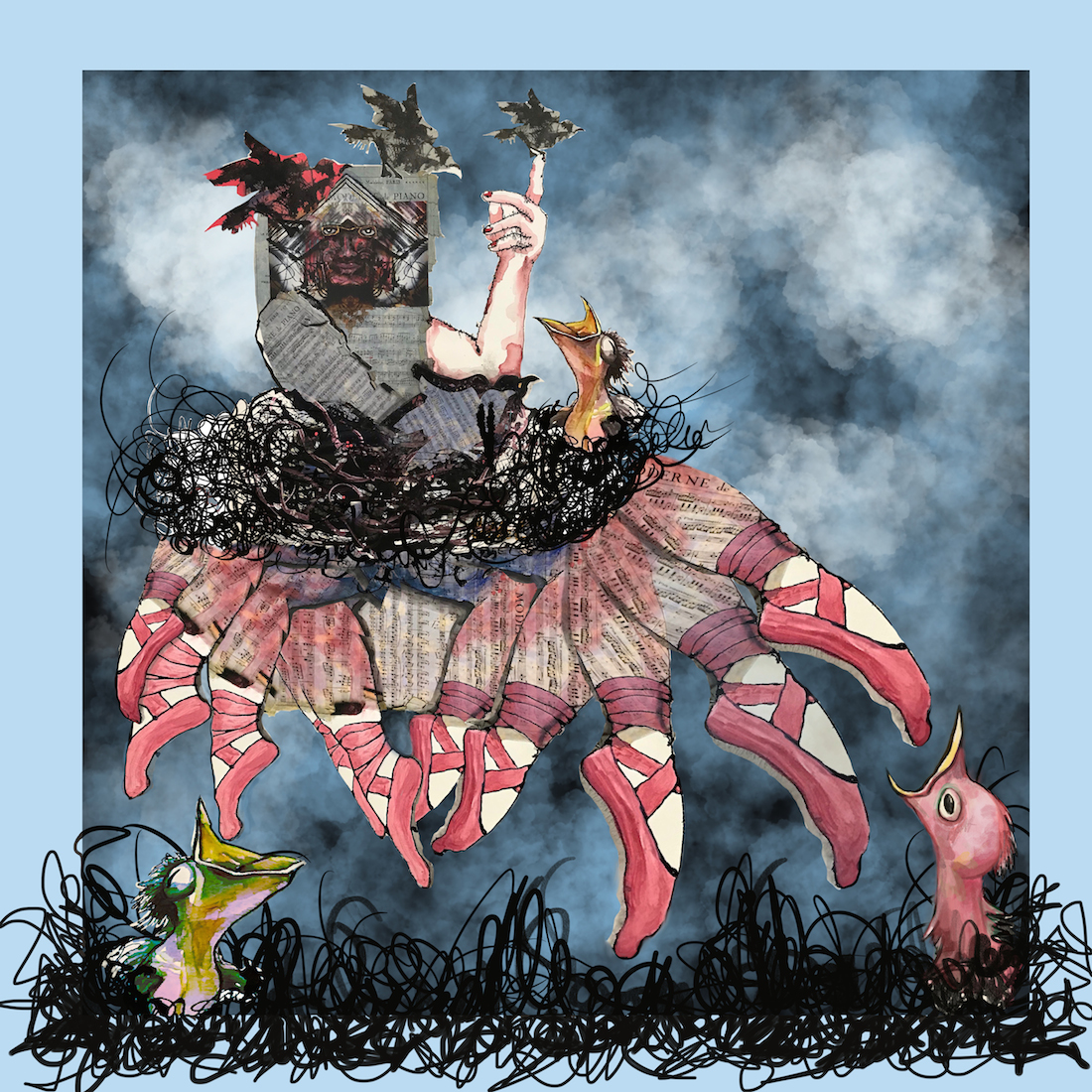 From one tiny digital drawing of a face, I now have four works of art. They have gone through the sieve of traditional media (collage, drawing and painting) and various digital applications. This final image is absurd yet deals with serious themes: flight/escape, birth, joy, vulnerability and craving.
I have no idea what our new normal will be in future or whether art can bring about change. All I know for sure is that art is continuously censored or used as a propaganda tool so it must have power.
I add my voice to those who scream. 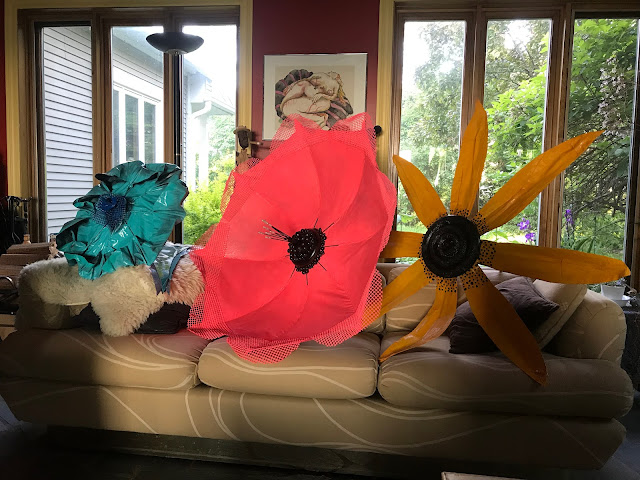 Another project done!. Life is too short to twiddle my thumbs. It fascinates me how elements of projects look HUGE in my home but when viewed in an outdoor environment, they seem teeny weeny. It's the sky's fault. The ceiling is a tad too high. For Vaudreuil-Dorion's Éveil (Awakening) project, the municipality wanted us to re-purpose some of their accumulated art stash if possible. I went over to the building that houses magic bins full of fabrics, chicken wire and more, and tried to imagine what I could possible use to create some faux flora. I came across a bunch of discreet, (one might say boring) black umbrellas and thought that an open umbrella kind of resembled a flower. My only concern was that the stem and handle were in the wrong direction. I'd have to invert it, as though it had been blown out by the wind.    My initial dilemma was trying to figure out how to attach the flower to the pole the city provided in an aesthetic way. I hoped the umbrella stem migh 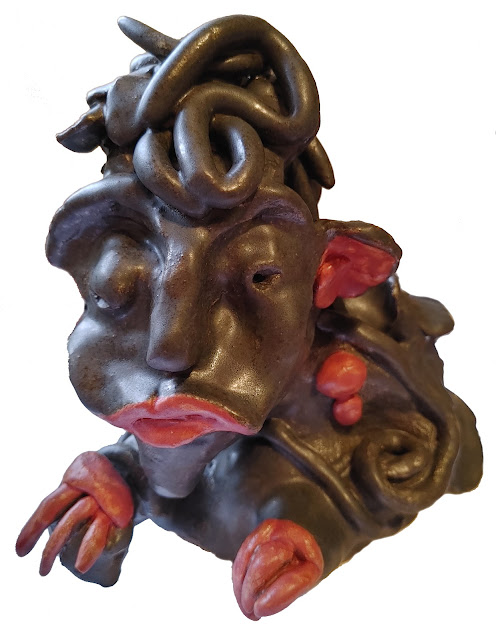