I am a member of Gueulart, a non-profit artist-run centre situated in St-Isidore. I don't live anywhere near this municipality, in fact it's in a rural area 50 km away from my home according to the fastest route on Google maps. The place is lively! One half of the centre is for Coeur de Village Bistro Culturel, which is dedicated to selling local products. The other half is for music and artistic events (plus serves meals). Despite the pandemic, I managed to participate in two of Gueulart's recent theme-based shows. One was about giants.

When I first read the call for entry, I was transported back to my childhood. My favourite book was a collection of short stories about giants that I read over and again. My imagination created scenarios that I vaguely recall to this day.

Very excited at the idea of creating a giant, I hustled to my iPad and started drawing a "monumental" artist! A problem quickly became evident! The only distinguishable oversized traits in this character were his feet!

My giant lacked context and naturally, without a sense of scale, he didn't appear big. I attempted a different strategy and he suddenly shrank to a lilliputian scale in my enormous hand. I was definitely having a Gulliver's Travels moment. 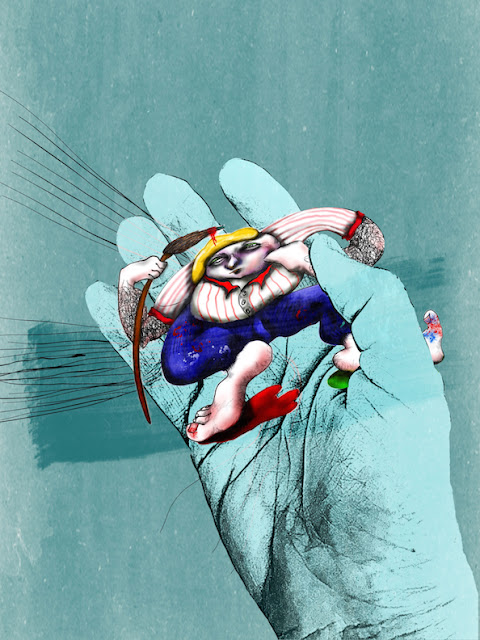 The project was temporarily put on hold due to the pandemic. After the isolation lull, I had a discussion with Louise Page, President of Gueulart and learned that I had misunderstood the gist of the project. Artworks were meant to be about individuals, living or dead, who were considered giants in their field (either by way of their accomplishments and/or expertise) ...OR about well-known mythical gargantua such as Goliath.
Louise asked if I could create at least one work based on Georges St-Pierre, an international martial arts champion who grew up in St-Isidore. My knowledge of Georges, also known as GSP or "Rush" was nil. I set Google search in motion and soon discovered a fascinating, classy and very successful athlete.

My drawing below was inspired by a video of an exercise routine he posted on Twitter on Feb 26, 2018. He is beyond impressive. Balancing on an uneven, moving, hemispherical apparatus (as you can see, I am quite unfamiliar with exercise equipment terminology), he crouches on one foot while holding weights. At one point he extends his other leg way back, bends over, and outstretches his arms horizontally while still holding the weights. He looks like he’s flying. On his feed he writes, “I decided to fix my jet lag by training in my hotel’s gym. It’s all about balance!”

In another video interview on Twitter, he states that he loves to train but hates to fight. As he prepares for a match, his confidence grows and he becomes a different animal.

GSP is slowly morphing into a bird-like creature. He must choose to either become a dove, a bird of prey, or a combination of both. It's all about balance.

What is particularly exciting about artist-run centres is that they provide creators with a safe environment in which to explore, experiment and grow in new directions (and maybe to become different animals). I was given a nudge to create this drawing and discovered a magnificent "giant like no other" in the process.

Art sure is interesting.