THE CASE OF THE TEENAGE FLY 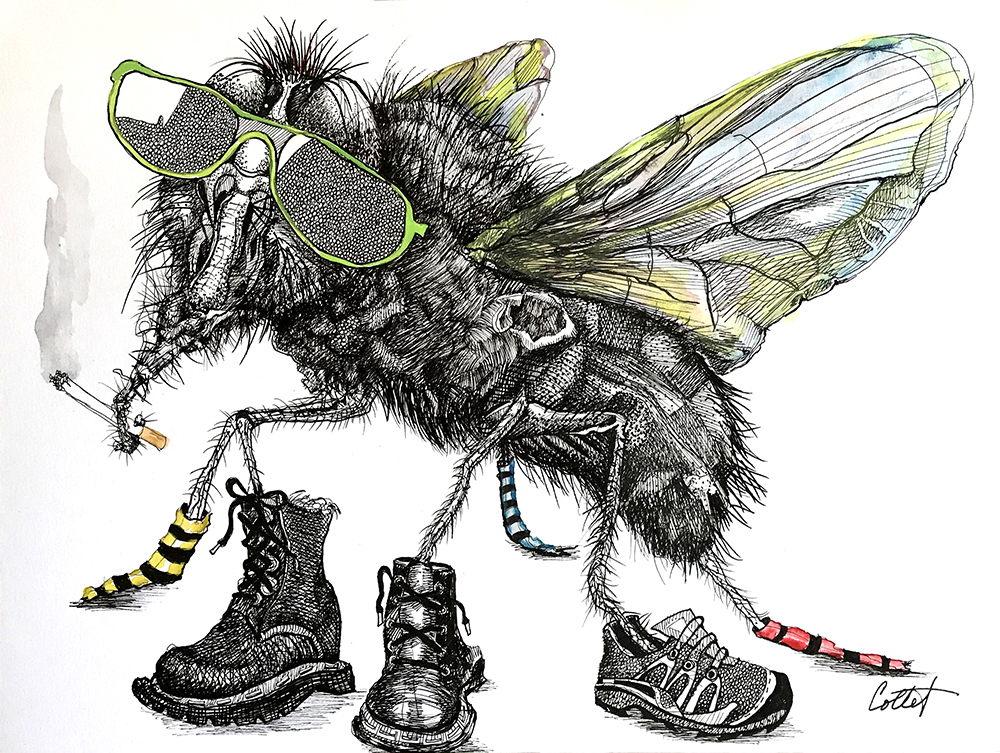 I'll never forget an event that happened when I was in Grade 9. What was I, fifteen? Coming down the stairs from the second floor of my high school, I crossed my English professor climbing up in the opposite direction. He said something along the lines of "Hi, how are you?" and I, out of nowhere, burst out sobbing. The poor man did nothing to deserve such a torrent. He looked stunned, wondering what the hell was going on. Damned if I knew! (If one chooses to become a high school teacher, unexpected sobs are familiar manifestations that come with the territory but I must admit I felt sorry for him.)
Anyway back to the fly. One night we somehow let an adolescent fly into the house. It had to be a teenager. Why? Because it behaved like a "stereotypical" hormonally charged incarnation who sometimes (like often) has little or no control over his or her emotions. (My apologies to all calm, well-adjusted teens out there. I am basing this post on lived experience!)
It was a noisy, active sucker! If I was to have a quiet, peaceful night's sleep I had to find my swatter. Mine is a lovely swatter, yellow, in the shape of a bee. I hid it discreetly behind my back. Flies have complex eyes so I aimed for a Klingon cloaking device approach but this bug was clever and high-strung. Being a young pubescent fly it couldn't keep still, refused to land, had a woofer attached to its vibrating wings, droned on incessantly, zeroed in on lights, and naturally, took over the bathroom.
I whisked the swatter wildly to and fro in the hope that I might by chance kill the noise but it was way too fast for me. Flies tend to fly high so I tried to appear nonchalant in the hope that it might relax. But no way! It continued to spiral aggressively around my body. I turned out the lights, whipped out of the room and closed the door. Surely a dumb bug could not escape the confines of the bathroom. In order to abscond it would have to sneak its way under the door.
Well, abscond it did! Just as I started to drift off to sleep, I heard him. This Musca domestica was not so dumb after all. He made his way to my companion's office. Mart, sitting at his computer, marvelled at the fly's energy. A buzzer on amphetamines! Eventually he got up to let the fly enjoy the blue screen light solo.
The next morning there was no fly to be seen (or heard). It must have died somewhere from sheer exhaustion. I imagined it lying on its back with its long tongue hanging out. Life was quiet, no buzzing, no drone. It was over.
As I started to make breakfast, a big, fat floater drifted into my line of vision. The pubescent dot was back, as hyper as ever! Was it my imagination or had it grown to gargantuan proportions over night? Once more it refused to land. Suddenly it vanished (no doubt with the intention of annoying me every time I cooked in the kitchen). Over the next few days it came and went eluding our constant efforts to seek and destroy.
Finally it disappeared. I suspect it managed an outbreak when I opened the door to let in the yellow neighbourhood cat who visits regularly. The fly's body was never found. Maybe it served as a delicious meal for the multiple spiders who repeatedly find a way of decorating the corners of our house. Help me! Help me!
But that's another story.