TERRE-MAIRES 2 - WORKING WITH A MAYOR

What we call "Cultural Mediation" in Québec is perhaps akin to "Community Engagement" in the rest of the English speaking world. It's the "in" thing right now and while I admire its aims in general, I do not create art with this purpose in mind.

When the CACVS (Conseil des arts et de la Culture de Vaudreuil-Soulanges) and the MRVS (Musée Régional de Vaudreuil-Soulanges) organized their second Terre-Maires project, I thought I'd give it a go. The concept entailed creating artwork with a mayor of one of the many municipalities in this county. Politicians are not shrinking violets and have clearly defined ideas. This project required savvy listening skills and I planned on morphing into a sponge to fully understand my assigned mayor's vision to achieve a decent outcome that would please both of us.

The pandemic put a damper on the whole process which took much longer than it should have but I think it had a positive impact on our result over all. Had I created a work in combo with the mayor a year before, it would certainly have been completely different.

The project was multi-layered with many components. Politicians from multiple municipalities in the Vaudreuil-Soulanges county had to choose an object from the MRVS collection that had meaning for them. I was assigned Pierre Séguin, Mayor of Île-Perrot. He chose the following object: 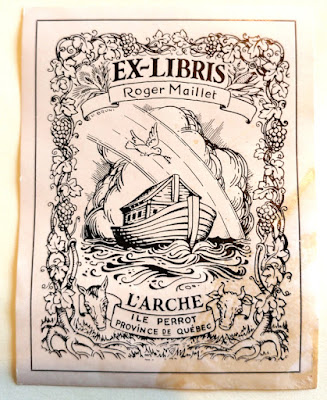 This ex-libris belonged to Roger Maillet (who has a very interesting history in our region) and was designed by the artist Umberto Bruni. I undertook extensive research to find out all I could about these individuals and the ex-libris itself before I prepared for my first interview with the mayor. The ex-libris was to serve as a springboard for our collaboration.

The theme of the exhibition had to address climate change and sustainable development. I prepared a series of questions for my first meeting with the mayor in January 2020.

No one can accuse me of being unprepared! I went over to City Hall keen on brainstorming. I listened intently to what Mr. Séguin had to say and went away with a bunch of totally inappropriate ideas because of personal biases. So much for my active listening.

Here's what I heard:

I was initially distracted by the chosen object, the ex-libris. I felt its elements had to be included in the final piece somehow. I fixated on the dove, the ark, water. I did quickie drawings of a dove, an earth mother, and a floating book with potentially the mayor's photos inside it. I reflected on peace, mother goddesses and arks. While I sensed I was not on the right track, I kept a record of everything nonetheless in case these ideas might be of use in future projects.

We met again in February 2020. Mr. Séguin said he would soon send photos he had taken of the four municipalities. In March 2020 he emailed more historical info on Roger Maillet.

Pandemic lockdowns hit after our second meeting and all mayors in the county became overwhelmed with new priorities. The Terre-Maires 2 project was put on hold for an indefinite period.

Our venture was reactivated in 2021 and the mayor sent me these photos of the four municipalities in early February. 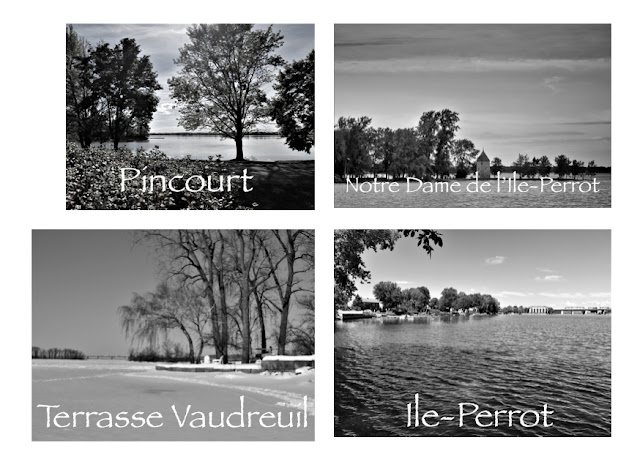 Because of pandemic restrictions, further meetings happened by phone. Mr. Séguin was open to fantastical options which allowed for new alternatives.
I googled a map of l'Île-Perrot and created monoprints in black acrylic paint based on its shape. The prints looked like prehistoric cave paintings. I promptly decided that even if these were quite cool in their preliminary stages, I had to experiment and play with other alternatives.

I switched over to Photoshop and started overlapping photos that Mr. Séguin had sent me onto a map of Île-Perrot. I did a number of them but was totally dissatisfied. 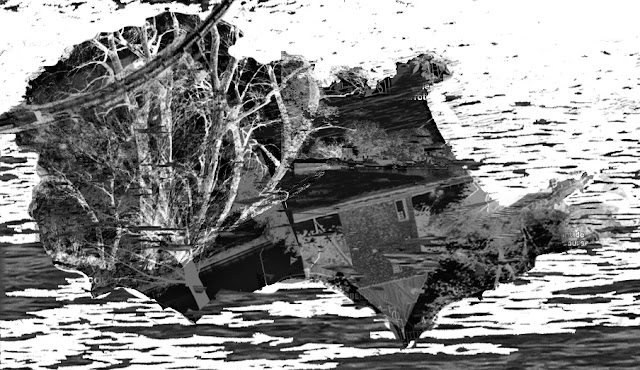 The map needed a third dimension. I tilted it and added depth in a dark rose hue.

I experimented with the photographs, played with negative images, warped and elongated shapes including the historic windmill of Notre-Dame-de-l'Île-Perrot. I overlapped photos onto the map and things started to come together. Mr. Séguin had said during our meetings that he loved abstract art, water reflections and transparency. I sensed that these elements were essential in achieving something we would both like.
Finally an aha! moment happened. I created a preliminary image that spoke to me but I knew I still wasn't quite there. 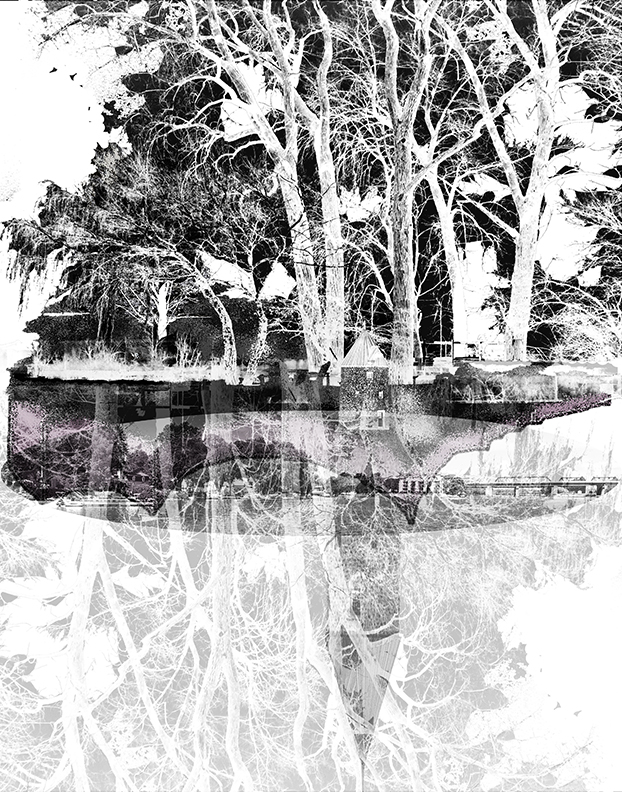 I flipped the image vertically and found it equally interesting. I decided to crop the original into an elongated format. I sent various options to the mayor along with matting possibilities and we agreed on a final solution. We presented both the initial and flipped elongated versions together. I love how the rose of the tilted map gently pierces through black, white and gray. 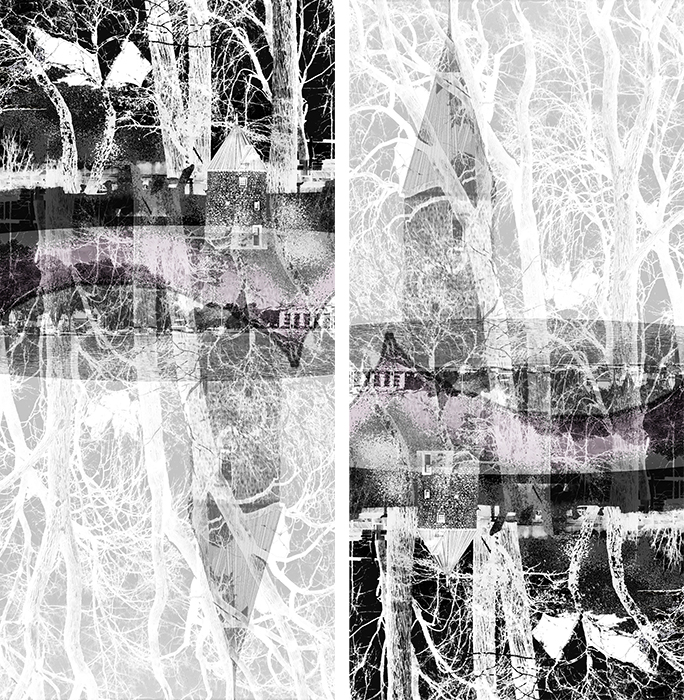 Once printed and framed, we were both satisfied with the end result from an aesthetic standpoint. Most importantly, the mayor felt it expressed the beauty of the region as well as his love and vision for the municipality.
The CACVS has published an online catalogue of the exhibition which brings to light all facets of the project (including a writing component and contributions by preschool children) as well as photos of the final artworks created by participating artists and their respective mayors.
The process contributed to my personal growth at multiple levels. Thanks so much to the CACVS, the MRVS and to mayor Pierre Séguin for a fascinating journey.