The City of Vaudreuil-Dorion invited nine visual artists to create exterior installations inspired from texts by writers who live in the Vaudreuil-Soulanges region. Artists were paired arbitrarily with an author. I worked with lovely prose by Marie-Andrée Michaud which described her childhood memories of spring thaw and how melting reflective snow on the sidewalk reminded her of precious stones. 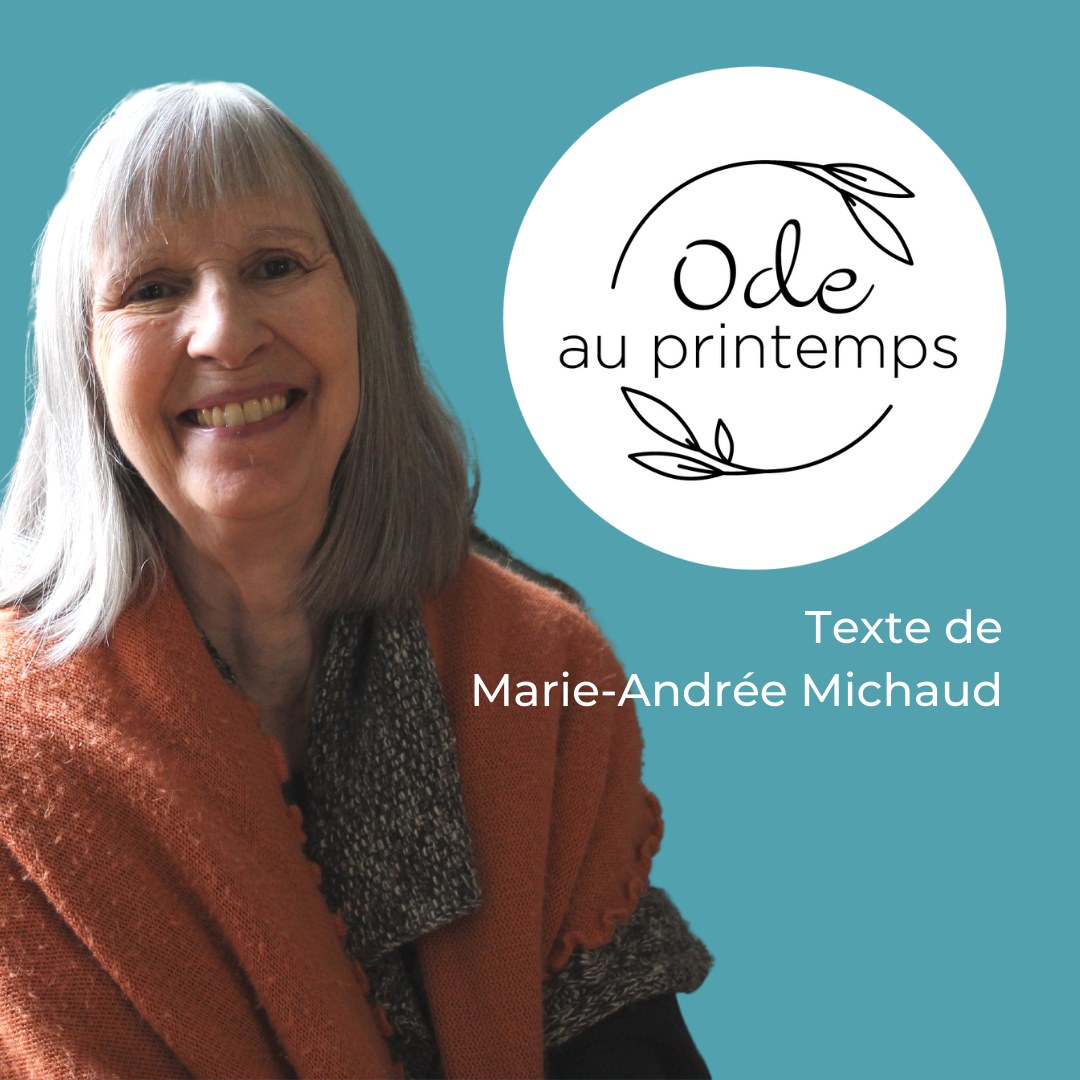 An art circuit dotted the municipality during the entire month of May and citizens were invited to either walk or bike to each installation to view and appreciate these artistic pairings. The community loved the works, especially after multiple pandemic lockdowns. 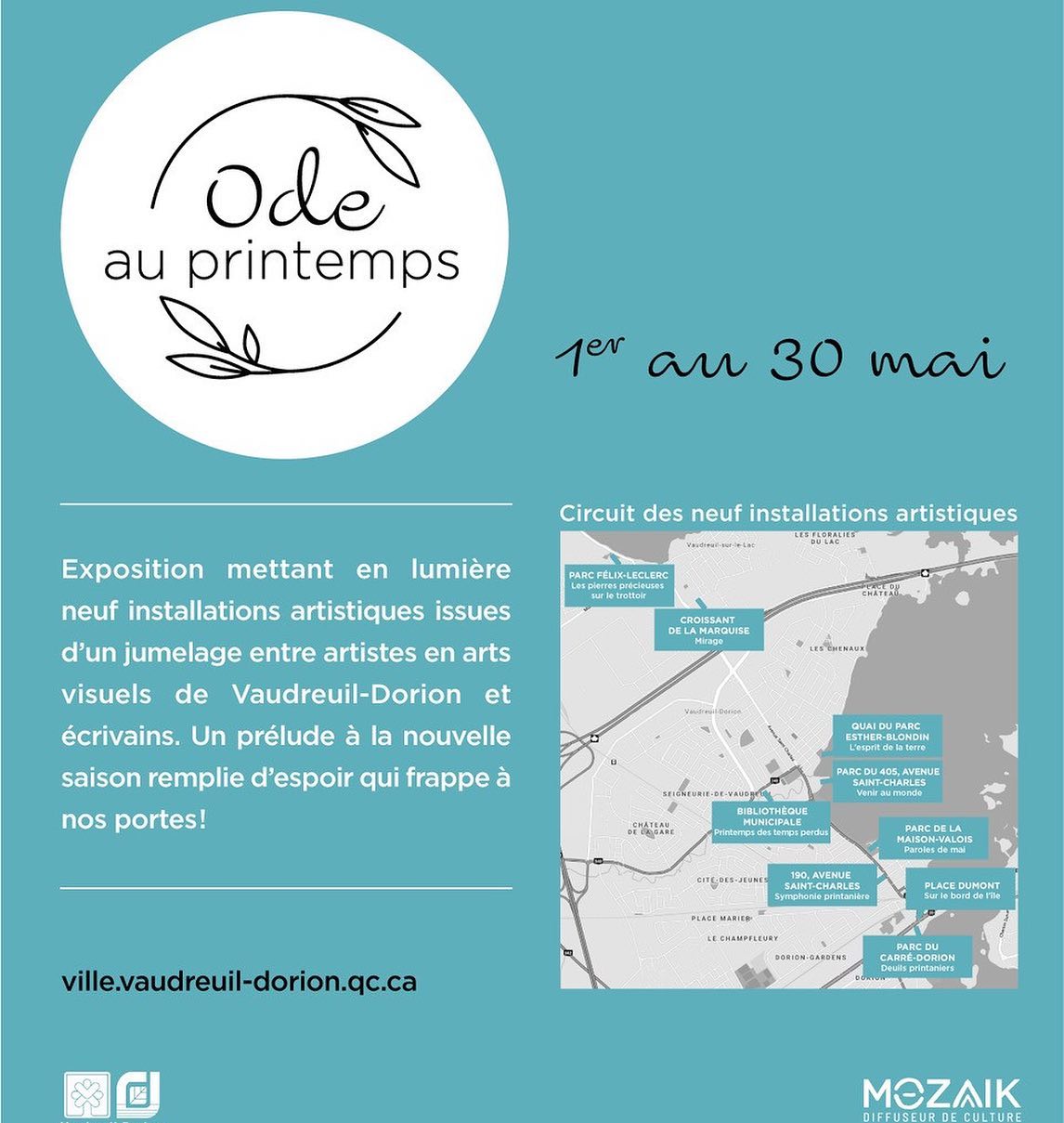 This project was a major challenge for me because it was totally out of my comfort zone (public art). My initial concept differed from what became the final installation  I was aiming for a transparent drop of water which, when installed on the water line in the bay of a local park, would marry with the surroundings and distant landscape. I learned that being flexible is key to achieving some degree of success with these types of projects.

Text had to be included in the artwork. I initially tried to merge the entire story within the drop shape but the visual ended up looking like the back of a shampoo bottle. I quickly discarded that idea.

The city asked the artists to submit a location within the municipality where they wanted their work installed. I had chosen a spot next to the water in Parc Valois but public works nixed my proposal due to potential spring flood risks. Digging was also not an option. I was offered a spot in Parc Félix Leclerc which I wasn't crazy about because a road and fence separated the land from the water. If my drop were remained transparent, one would see the road first, a fence, and then perhaps the distant landscape. Concept blown! Oh boy!

I was aiming to have the drop printed on transparent plexiglas but before I went gangbusters on that idea, I asked for advice from a friend, Roland Musatow of Phénix Communication Graphique. He helped me prepare my design for printing (something I had also never done before). He felt that the drop would have more impact if it were printed on an opaque white PVC panel. "Your white will become transparent on a clear plexi!" he said. "WHITE IS NOT A COLOUR" when you print on something transparent!" His mantra was a lifesaver in the long run. It's important to listen to a voice of experience.

Initially I hadn't planned on a fancy structure for the drop because I imagined digging into the ground and anchoring it there. Since this option was not possible, I had to find another way to install it. The city suggested I contact Jacques Grenier who is used to working with artists and adept at helping them find solutions for building or assembly.

Jacques suggested a triangular teepee approach so we went with that. Two by fours were used for the base and the city provided metal tubing previously used in other events. The structure Jacques built with the repurposed tubing was perfect. I had a six foot image printed on both sides of a white PVC panel and it came out beautifully. Another friend of mine, Monica Brinkman, mosaic artist, provided heaps of precious stones (mostly marbles) that I deposited under my drop. They twinkled in the sunlight. 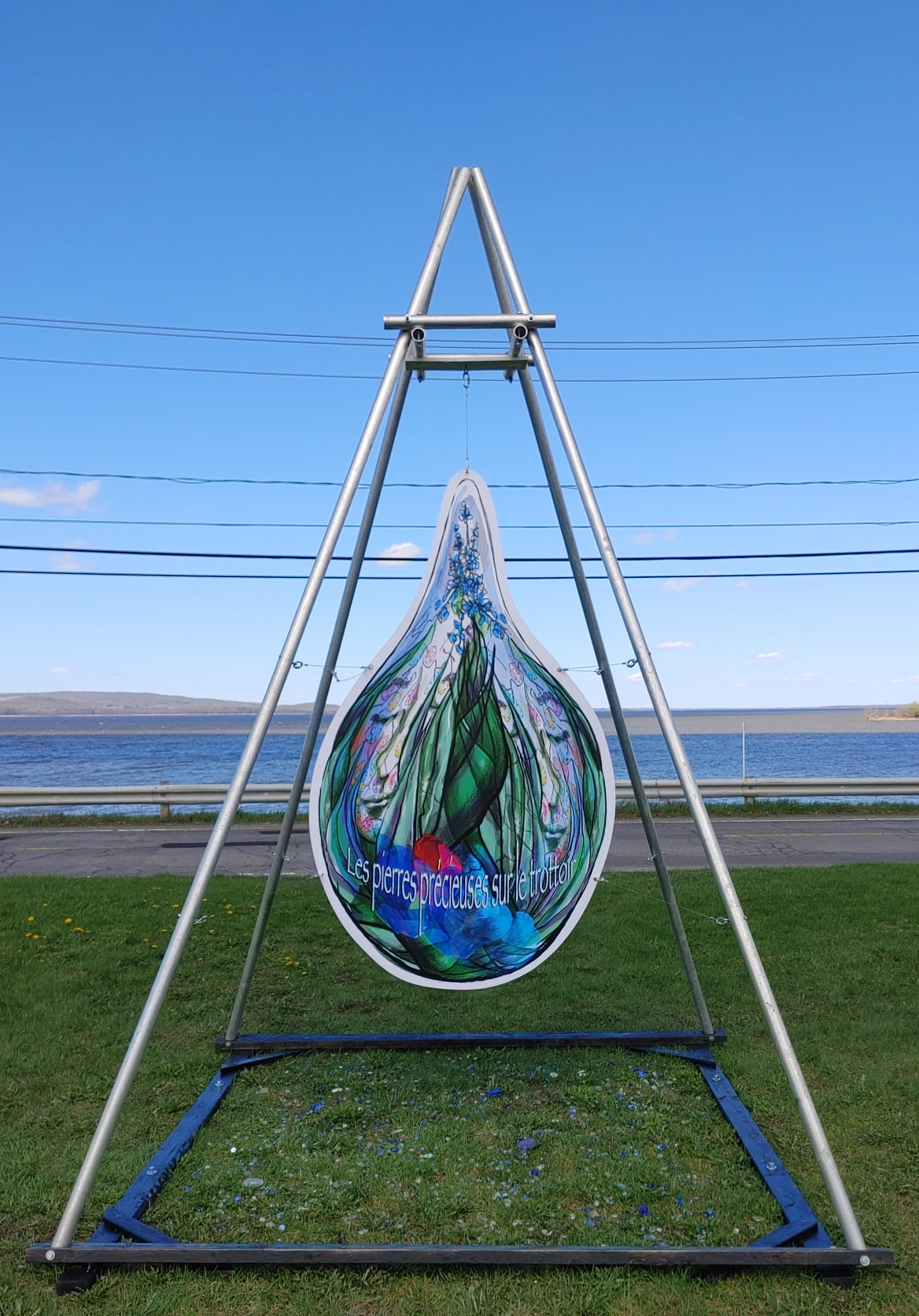 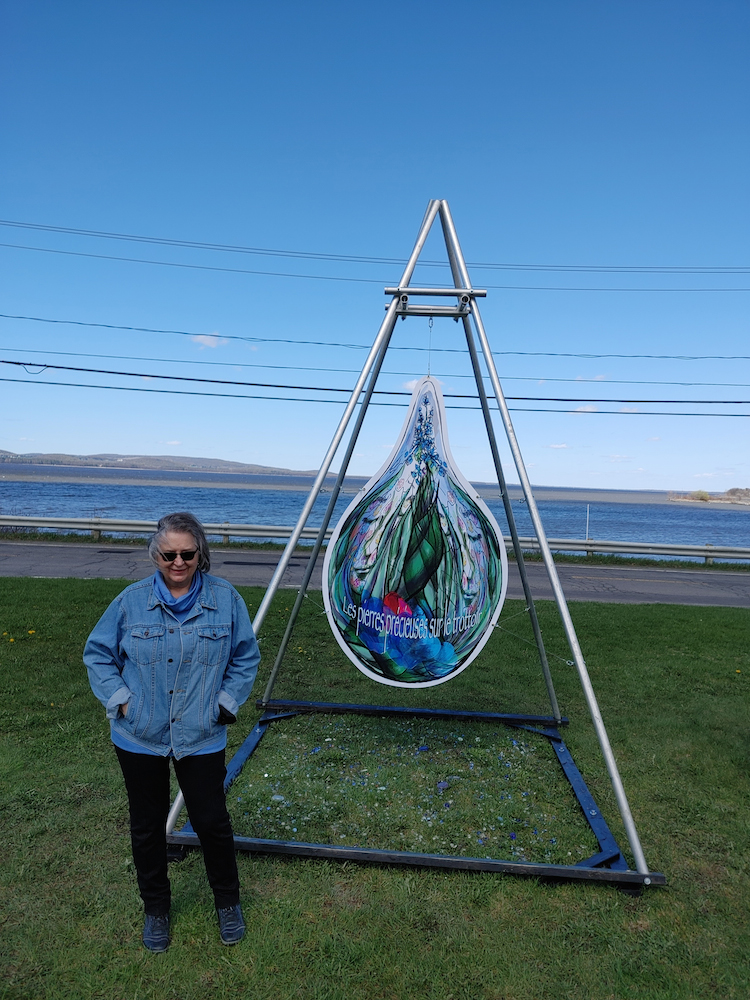 Working with others led to an outdoor art installation that grew into something unexpected. I was so lucky and grateful to have such talented, generous people in my entourage and support from the city.

My final challenge was scooping up the reflective marbles once the exhibition was over. It became a wonderful, strange, time-travel type of experience. I was transported back to childhood, to an age where my mind teemed with stories of thieving pirates.

Some of the marbles had begun to embed themselves into the ground. I used my fingers as a rake to find and pry them out. Others that remained on the surface were gathered one by one. It took over an hour lying in the morning sun beside the wondrous Ottawa River to reclaim my treasure of precious stones. 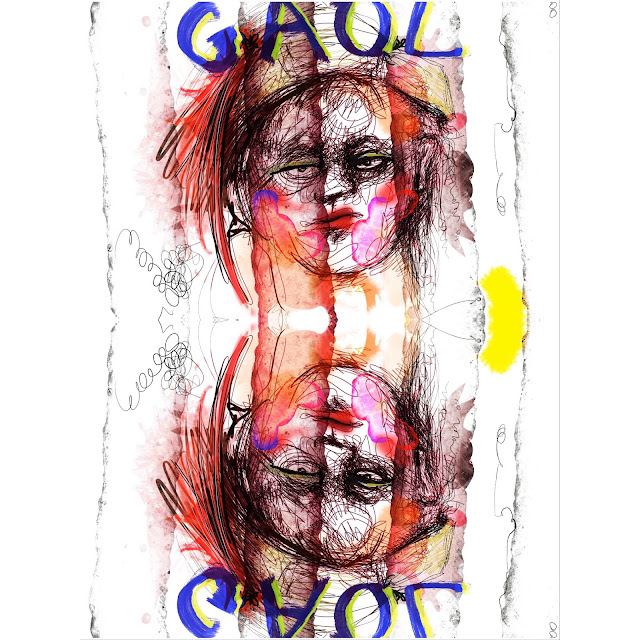 Despite all the time available to me during the pandemic, strangely, I have not felt like writing. Instead, I've been making art and experimenting with new applications on my iPad. Art projects and shows that were postponed in 2020 are scheduled once again and new ones are also coming to light. I will be getting a Covid 19 vaccine soon and hope that life will become a bit easier if not completely normal. That may take a few years. I just want to be around, adding to my already huge art inventory. My work over the last few months has mirrored my state of mind. Moods and coping mechanisms vary from day-to-day and themes recur unconsciously. Similarities become obvious only in retrospect.  Here is Gaol, pronounced "jail". For some curious reason, Grover from Sesame Street popped into my head as I included the word gaol on this digital print. G Grover - G George has become an ever-present ear worm. Oh how I amuse myself! I went through a bird period for a while, which I touc 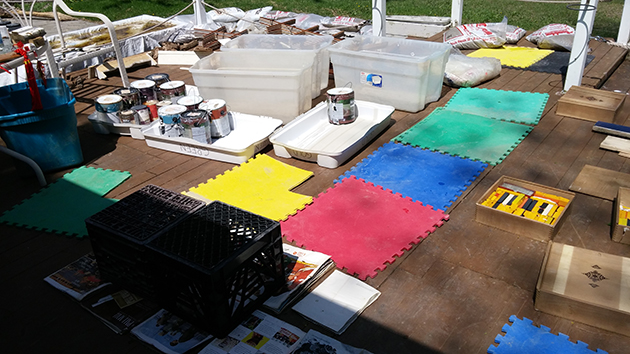 THE AFTERMATH - WHERE'S NOAH WHEN YOU NEED HIM? (PART 3)

The water had an impact but we were lucky. Our house, unlike some, was not destroyed.   Some of the plastic bins that we thought contained slightly oxidized cans of paint unfortunately stored my partner's personal archives. He discovered dripping wet slides, 40-year-old letters, cards, photographs, memberships, certificates, and cherished newspapers that highlighted important historical events. The whole lot smelled like bullfrogs and dead fish.  Out to dry and to sort Memorabilia are like the breadcrumbs that Hansel and Gretel left behind to find their way back home.   When our past disappears, we're lost. To quote an expression often seen on Twitter, "it's sad!" We tried to salvage what was soaked by the deluge. I lay newspapers on the floor and we spread out the stuff to dry. Some of the letters were written in fountain pen. The ink ran and the assorted scrawls became illegible. Beautiful patterns emerged, some reminiscent of Rorschach tests.  I