LA PLACOTEUSE (THE CHATTERBOX) FROM START TO FINISH 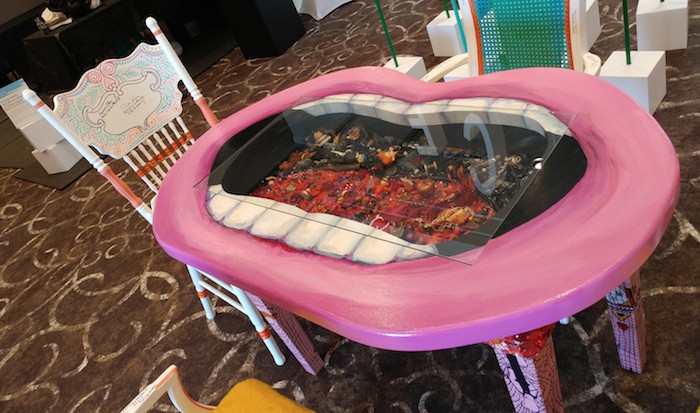 The City of Vaudreuil-Dorion recently hosted a conference on culture "Les Arts et la Ville". Representatives from various francophone municipalities and communities across Canada as well as special guests from Spain and France were in attendance.

The theme of the conference was "Une rencontre qui transforme" (loosely translated as "An encounter that transforms" or better still, inspires and leads to change). The municipality asked mosaic artist Monica Brinkman who has extensive experience in cultural mediation to come up with a creative activity for the event. She decided to work with fundamentals. Where does powerful dialogue usually take place? Around a table.

She invited me to co-create the project. We met at our local coffee shop to throw ideas around. It's interesting to revisit some of the notes I scribbled down during our conversation. Wonderfully messy, these early musings were embryonic. 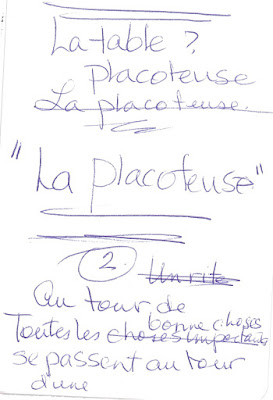 Points we pondered:
*******
Our concept: Create a gabby table and four chairs brimming with chitchat. In today's world, we connect primarily through technology. Let's look back and revert to a time when all good things, traditions, rituals, and experiences were shared around a table. Our unusual and magical project will bring the community together through conversation, laughter and play.
*******
The table had to be light and transportable, easily assembled and disassembled. Monica asked talented woodworker Jacques Grenier to build it for us. It had to have a rectangular hole in the centre with an attached wooden box underneath to hold the funky collectibles that would eventually be glued in there.

Jacques' masterpiece was in exquisitely sanded pine. I sketched out the mouth shape on paper which we then traced onto the table. 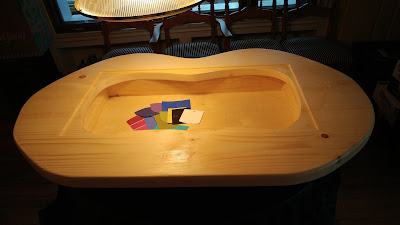 A few days after Jacques cut and sanded the mouth shape, we moved all the parts including the legs and side trim into my studio. My task was to paint something on the table surface that resembled a talking mouth. This presented an interesting challenge because the square opening in the centre wasn't exactly natural. Time for serious study! 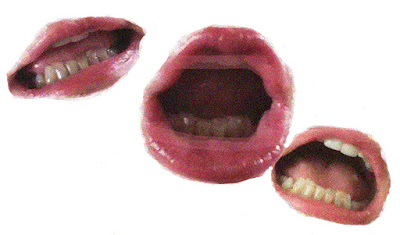 I talked to myself in the mirror (no one saw me.) The experiment revealed that when I spoke, my lower choppers tended to be more visible than my uppers. I took a series of selfies for general reference. 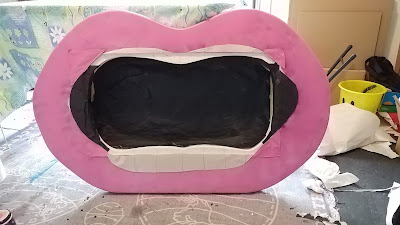 Both Monica and I wanted a work that made people smile and reflect, something funky, kitch and engaging. I used black gesso to create the illusion of a more natural oral cavity. The inside of the box had to remain paint free for the glue and assemblage elements to adhere properly. I temporarily shoved a large piece of black paper into the opening before attempting the lips. 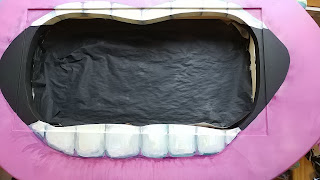 I applied a base coat of bubblegum pink on the kisser and suggested volume by adding and alternating red, magenta, purple, and burnt orange hues. The teeth became increasingly natural with added gray. blue, creamy white, yellow and finally pink (for the bits of gum that showed).

Once this process was well underway, Monica and I went shopping for secondhand chairs. We visited a couple of places and found four that we liked. 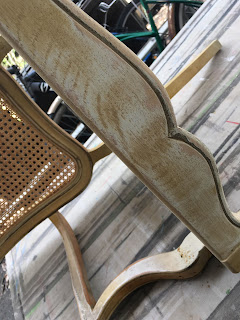 Our next jaunt involved a schlepp to a fabric store to find eye-popping material to reupholster the chairs. We originally searched out fabric with unusual patterns when suddenly, we came across a roll of deep yellow faux-fur material. We both fell in love with it and agreed that this shaggy, luring pile would enhance our concept. 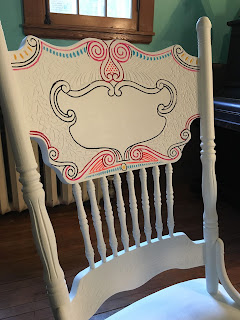 After removing the upholstered seats, Monica sanded and primed the chairs, applied white paint in some areas, turquoise in others, as well as marker colours in and around various crevices. She also painted accents in bright colours.

One particular chair was originally upholstered using methods from "the dark ages". The seat was jam-packed with straw and springs while the back was stuffed with straw only. Monica was touched by these techniques from the past and wondered what kind of conversation she might possibly have with the person who constructed this elegant chair.

The straw upholstery was reused and covered with the wacky yellow fur. Monica created charismatic, eccentric chairs that looked ready for a giant dollhouse. 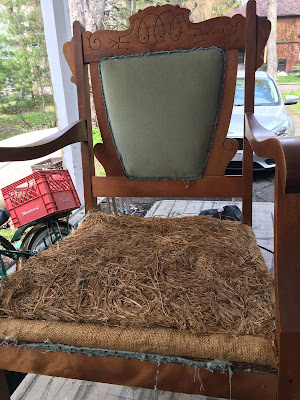 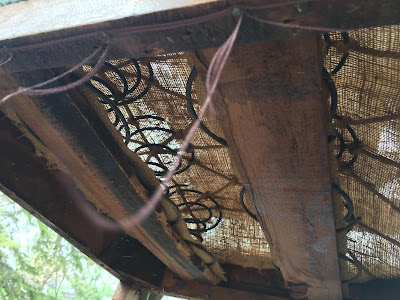 The middle chair below was "stuffing-less", in wood only. In lieu of fur, the seat was painted a similar turmeric yellow. 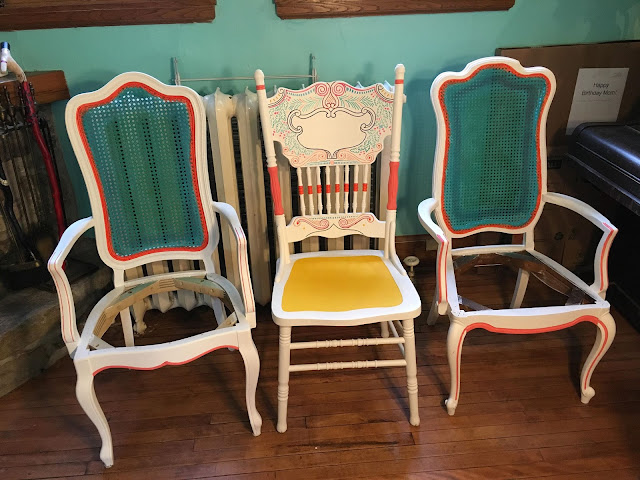 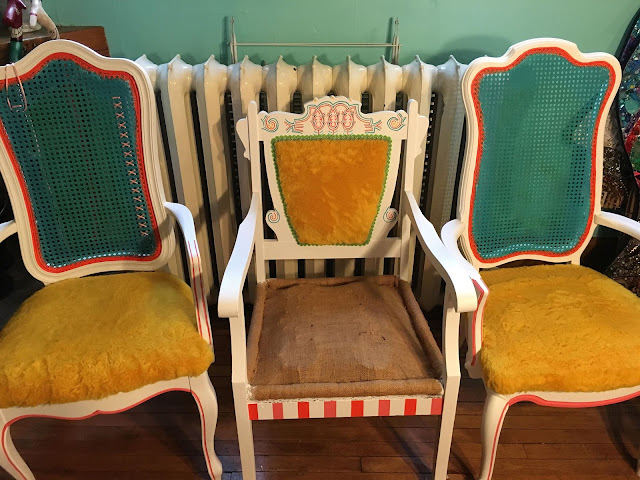 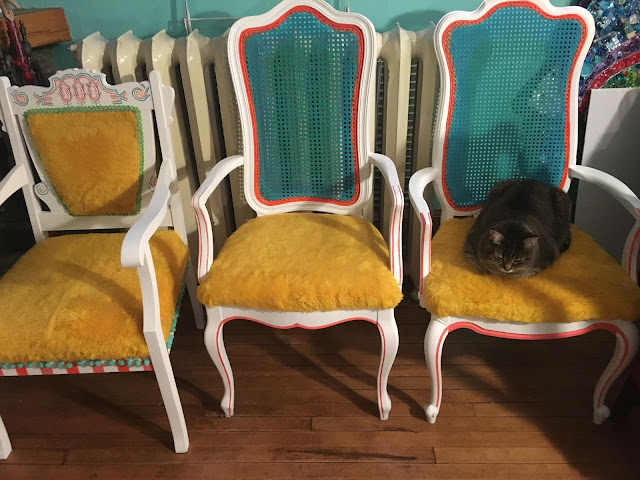 Monica's cat knew from the get-go that yellow fur meant creature comforts! The chairs had character but we decided to make them more human-like. The three wise monkeys came to mind: see, speak and hear no evil, a perfect adage for this conference.


While Monica was working on the chairs, I painted the table legs. We chose a peach-like pink for the base coat.

I have a penchant for fishnet stockings and 1940's and 50's silk nylons with a black line down the back like my mom wore when I was a kid. She always made sure the line was straight. It could easily deviate left or right in places. Stockings were held up with a cotton garter belt, generally a white one. Black must have been especially risqué in those days. As I thought about all these things the inevitable happened. Why not paint fishnet stockings looped with an inescapable curse of runs? The punk and goth culture embraced the run and made it a contemporary fashion statement! Why not us?

The first leg involved some experimentation. It would have been easy to just make diagonal crisscross lines to suggest fishnet stockings but that would have been predictable. Each leg acquired a unique personality.

Black garters appeared on the front side of each of the four legs and black vertical lines on the back of three. A few interesting "tattoos" could be seen through the stockings.

Monica measured and cut out pieces of plywood which she painted white. We planned on attaching these to the backs of the chairs so that the public could write on them with Sharpie markers (more to come about this later).

She brought over some pieces of plywood so I could create some human attributes for the chairs. I drew eyes, noses, mouths and ears which Monica cut out with a jigsaw. Our text messages during this period were a hoot! I was "working on the last leg" while Monica had "just finished cutting out the nose, ear and mouth". 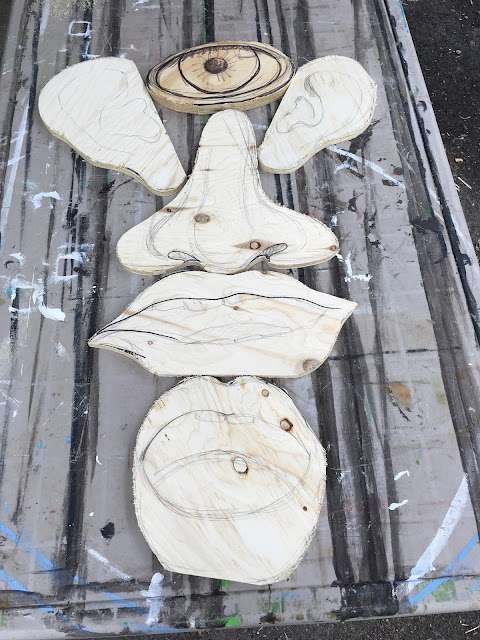 While I painted disembodied features, Monica sorted assemblage objects by colour. She laid some particularly playful toys inside the mouth to see what the tongue and cavity would look like. A number of smaller objects and tiles were also sorted by colour in preparation for the eventual gluing on the rim of the table. 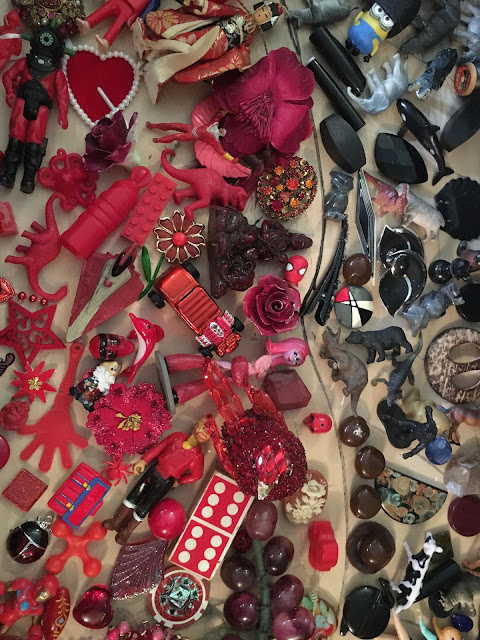 Monica temporarily screwed the painted features on the back of the chairs (except for the eye which was painted directly on the unstuffed chair). We couldn't stop grinning although at this point, we decided to trim some height off the white panels. 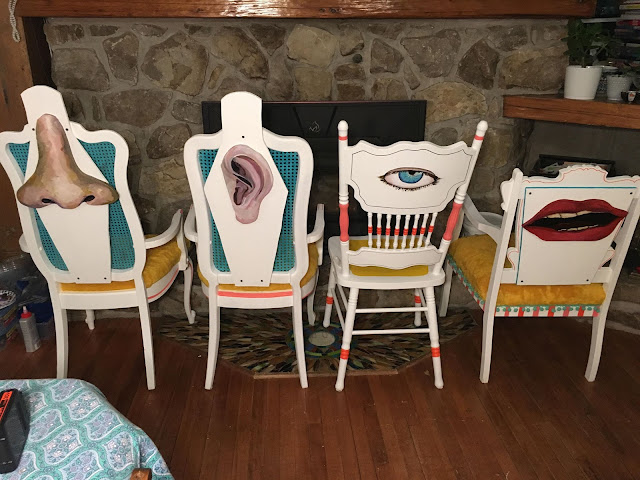 The city picked up and delivered the disassembled table and chairs to the Château Vaudreuil Hotel where the conference was to take place. Once there, I applied a preliminary coat of varnish to the lips to make them glossy.

People started to arrive. There were lots of things to see and do during the conference but participants were curious about our project and came to check us out. They were thrilled when we invited them to participate in the creation of the piece.

We asked each person who sauntered by to write their names, sector of activity, and which city they represented on white areas of the chairs. It was fascinating to see where everyone came from and over the course of three days, many returned to read the growing number of autographs and messages. 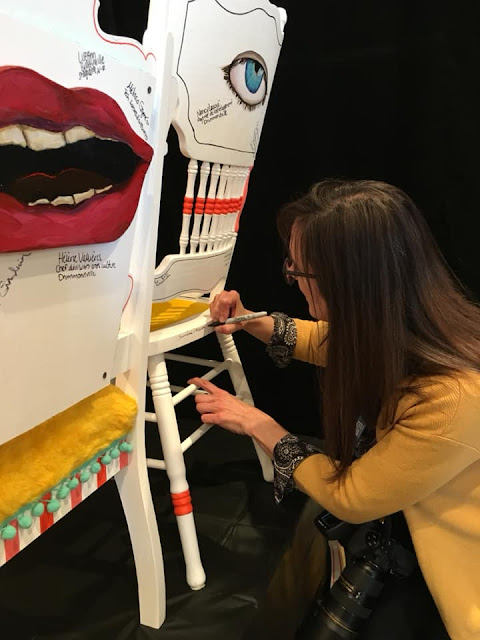 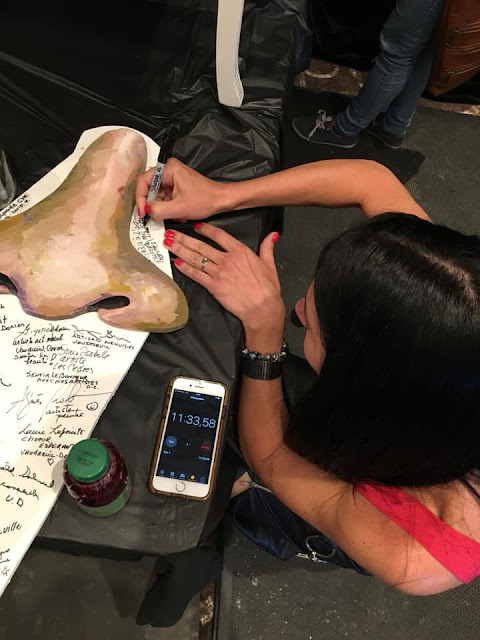 We also asked participants to glue assemblage elements onto the table rim and inside the mouth. Monica mixed pigment with the glue to match the the colours of the objects. 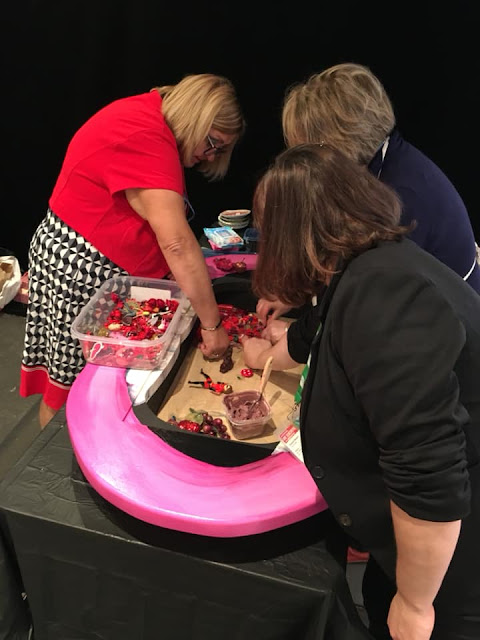 Everyone enjoyed leaving their mark. 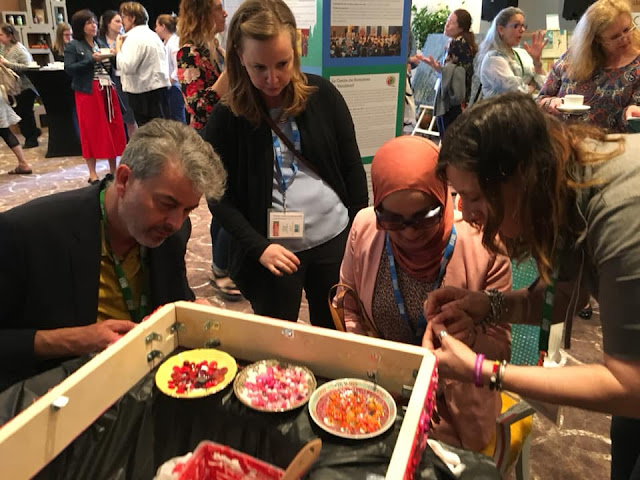 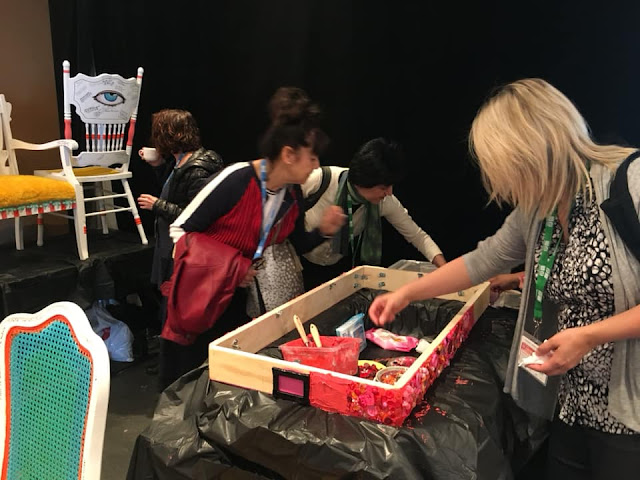 Jacques Grenier returned on the final day of the conference to assemble the table parts and to permanently affix the white panels with features to the backs of the chairs. 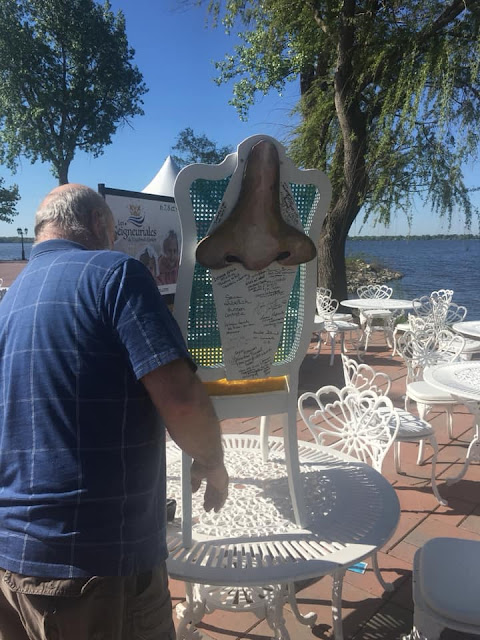 The textures in the mouth and on the rim contrasted beautifully with the painted areas. A clear glass panel was placed over the cavity. 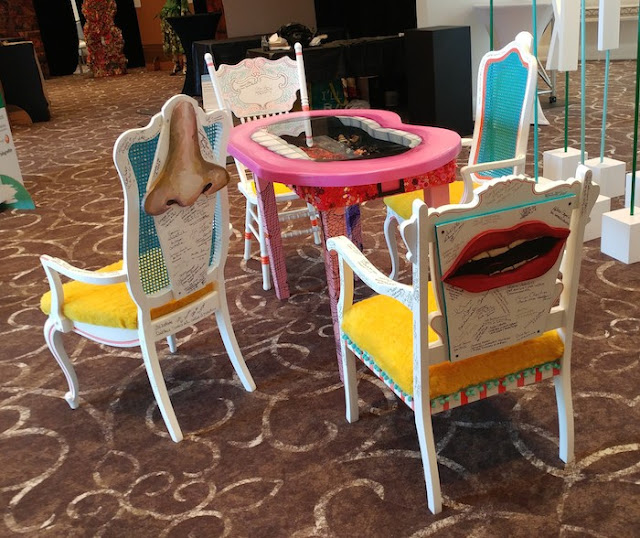 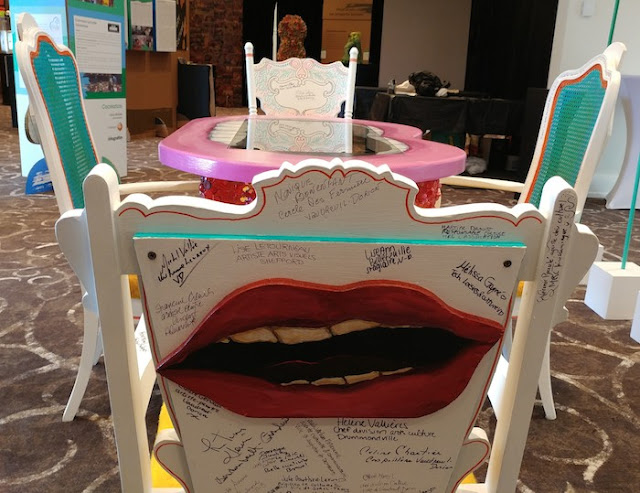 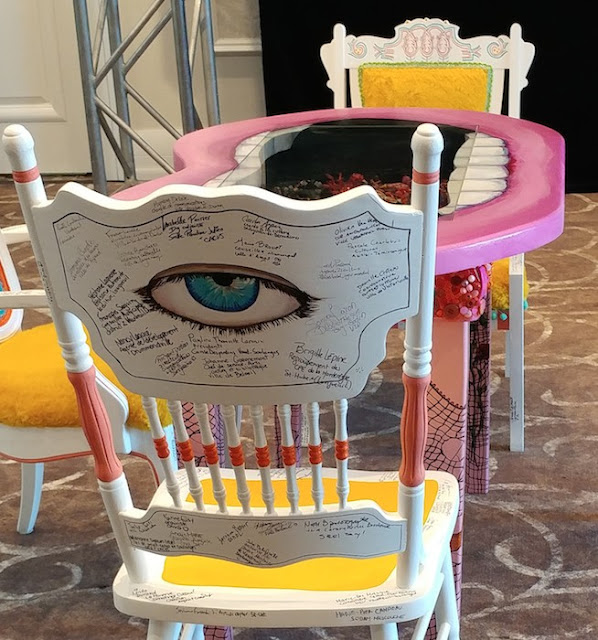 Artists often work alone but this was teamwork at its finest, a wonderful opportunity to exchange and learn from one another. What a gift! 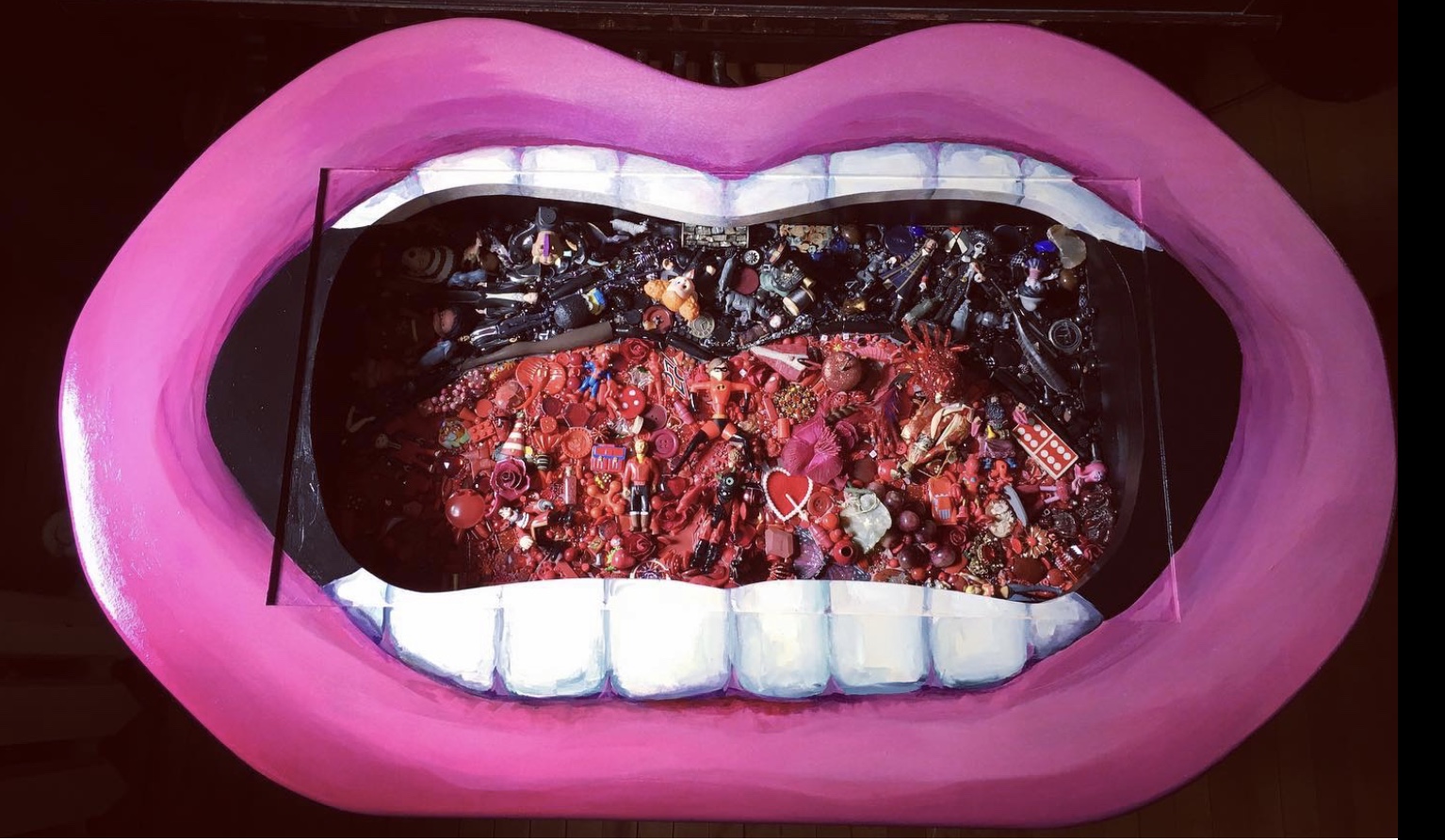 "Placoteuse" comes from the verb placoter - to chat. Our table and chairs inspired laughter and camaraderie during the conference. Hopefully they will continue to trigger stimulating chatter for years to come. 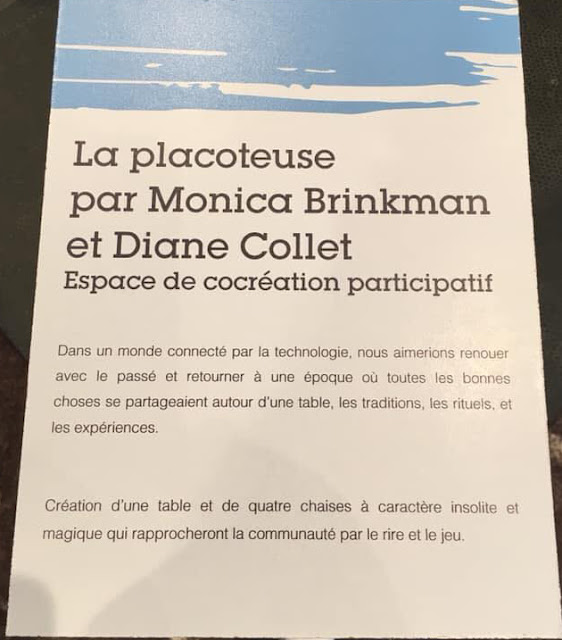 *Photos by Monica Brinkman and Diane Collet unless otherwise indicated

The Walk
Him: His little legs moved at a snail's pace. They couldn't go any faster, he was, after all, only 3. They were off to the park and he liked it there. Many children turned up with their mothers to revel on the playground equipment. The kids could be tentatively approached, but mostly, he liked to watch them.
Her:
He walked so slowly that like every good mother, she adapted her gait to match his. She couldn't rush him, he was only 3 after all. The bones in her legs and feet felt heavy as if welded to the asphalt. Her mind recalled x-ray machines that used to be permanent fixtures in shoe stores. You could see your toes wiggle in quality footwear made by Savage.
She became aware of her every step: raise the leg,  and let it inch down to meet the pavement.

Her knees bent easily, the hinges were obviously well-oiled. Slow gave her the time to get lost in her perceptions.

The Swing
Him:
They finally got there. The park was empty. Lonely swings were waiting for little bodies to … 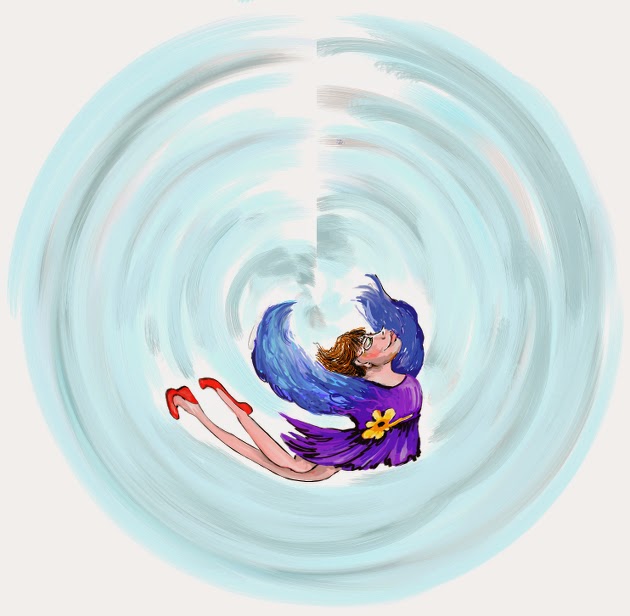 Preoccupations change over time.
I tend to think that the thoughts I had as a child were always lighthearted. They weren't of course, but my mind has a way of glossing over the bad bits.

Most are solitary memories, a state of mind.  Skipping rope; leaping so high I could almost fly!  Zooming on roller skates (4 wheelers); avoiding humongous cracks on the sidewalk.  Concentrating and frantically swinging my hips to keep the hoola hoop spinning.  Picking and eating wild bitter cherries off the trees on a nearby wooded path.Smelling ponds, admiring lily pads, and thinking that frogs swam like my dad.Slicing up old Sears catalogues, spreading cutouts across my bed, sitting yoga-style near the pillows, creating pretend homes inhabited by perfect pretend people.Staring at ugly motifs on the living room curtains and discovering monster faces.Roaring down nearby hills on my wooden toboggan, scratching my face in powder snow clouds.Charging anywhere on my bike, no hands on bars. 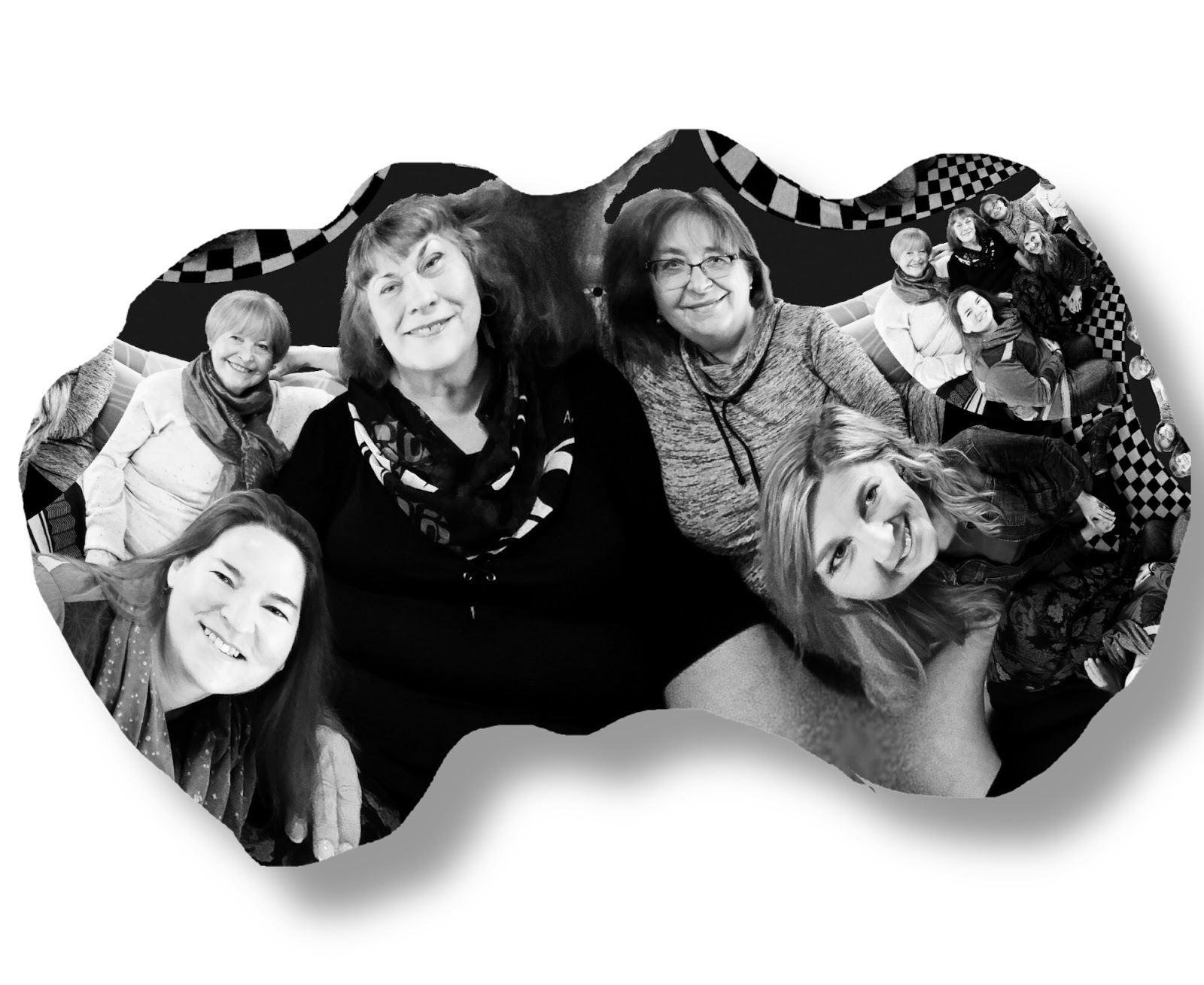