January 07, 2018
Square panels don't generally light my fire but they do seem to be dominating my production lately. That kind of concerns me. Why do I keep painting on a format if it doesn't excite me? It's a question of circumstances. Shows and projects requesting square formats keep coming my way. Who am I to say no to opportunity? I don't want to anger the deities by saying no.

I find squares, and for that matter circles, to be a tad problematic. Because length and width are the same, they tend to cry out for symmetry. For certain types of work centrality is very effective. One need only think of "op art". As a rule I'm not into symmetrical compositions but everyone knows that challenges help a person grow. Heck, (this is where you go to if you don't believe in Gosh), I must be burgeoning like a beanstalk. 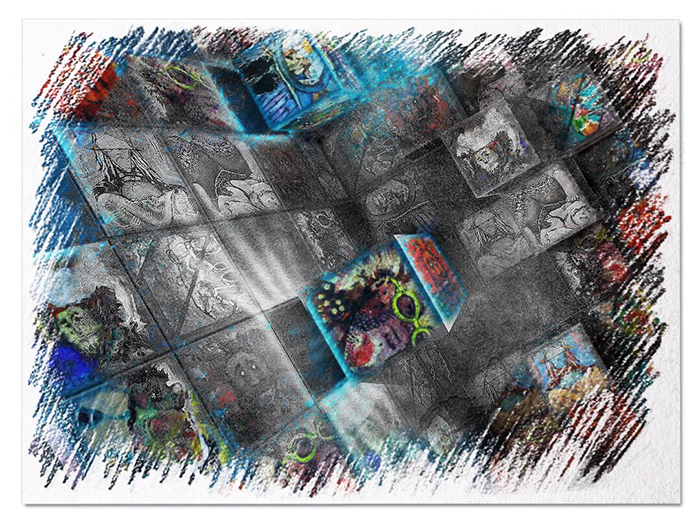 Here is some chronology.

A (1 square panel)
I joined an artist group last year. Our first collective project was based on the exquisite corpse principle. Naturally, we decided to work with square panels.

B (4 square panels, maybe more!)
I had teeny weenie canvases lying about and thought it would be a change to work on an extremely small scale. Curiously these little panels were 4" x 4" square.

C (2 and more)
I downloaded some new applications for digital work and started to play with some sketches. Often the apps changed the original format of my designs from rectangular to square. I was gobsmacked, convinced that the universe was conspiring to sabotage my love for the rectangular.

D (3 square panels)
I received an invitation to participate in an installation project involving over 75 artists. Panels were provided. Guess in what format? I was given three for the Lattices and Interstices show. This made sense because the curator, Claudine Ascher, wanted to display them in an arrangement that would create the illusion of a lattice. Negative spaces suggested the lattice and the paintings, interstices. Inspired by some of my digital creations, I painted more squares.

E (1 square panel)
I thought I was done with symmetrical panels but no. I received another invitation to participate in a fundraiser. The organization requested that artists paint on a SQUARE canvas.

A minimum eleven works, which in my estimation, seems like a really nice number to end this square bias once and for all. The occasional square panel is fine but no more repeating pattern.

Oh-oh. I just thought of something. I often look at my clock at 11:11, one of my sons was born on the 11th of the 11th month....I was eleven before I became twelve. Will eleven become my new square???