THE BLUE SCREEN OF DEATH

October 03, 2017
Having grown up in North America, I always associate black with death. But I've just learned something. When it comes to technology, another colour symbolizes the end, kaput, bye-bye, no more. That colour is
"BLUE"
I had a cellphone a week and a half ago. I really liked it a lot, used it for everything. The notes section was full of important things to remember like my grocery list, art ideas, the secret code to enter the residence where my mom lives, sayings that I wanted to write about or ponder, a menu of books to read, the name of my favourite sushi, radio programs or podcasts to look up on the web and more. I had pictures on my phone that meant a lot to me, in particular photos of a reporter from CBC whose haircut I liked. I showed it to my hairdresser last visit and she cut my hair just like hers. Ever since then everyone tells me my hair looks great. What will I do next time? The reporter was filling in for the regular bald guy. 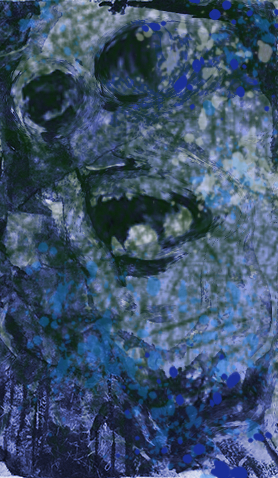 Phone numbers, yes there were tons of those. I didn't have to remember any, I HAD a cellphone. Found the name I wanted, pushed a button and voilà, the connection was made. Sigh. I lost everything on account of THE BLUE SCREEN OF DEATH.

Now let it be known that I had never heard of this phenomenon before. When my phone abruptly turned a glorious shade of light cobalt and refused to cooperate in any way, my partner Mart did a bit of research. Seems my phone had a reputation for dying young and turning blue. Hmmmpf!

The experience of being without a cellphone was interesting. I'm not as addicted as some but I like being connected to the world. The first day required an adjustment but in very short order, I found myself drifting back to a past life where I felt more relaxed, creative and productive. I felt no panic. Gone was the ball and chain. I looked at those around me and they didn't look back. They were too busy staring at their phones.

The only time I found the experience a tad painful was when I took off in my car. Security issues popped into mind: What if I have a flat, accident, or forget my keys somewhere? I quietly told myself that some good samaritan would surely have a cellphone. People tried to get a hold of me but couldn't. They called me later at home.

I have a new and improved device since yesterday. I do want one for security reasons. Luckily I had a little SD card that had recent pictures on it. I put it into my new phone so I still have photos of the haircut! These will be transferred to my computer and a USB key real soon. Creepily, all the phone numbers that I had on my old phone magically appeared on the new one. There is no anonymity in this world. Alas, art ideas, secret codes, book lists, favourite sushi notes are forever lost.

Here is what I have learned from this experience: