September 29, 2017
Le Musée Régional de Vaudreuil-Soulanges, a former boarding school for boys, is over 100-years-old. The building had its roof replaced recently and while most organizations would have probably trashed the old shingles, the musée decided to keep theirs. Always looking for innovative ways to raise funds, those in charge asked artists to create works of art on the old shingles to help pay for the new roof. Over eighty artists rose to the occasion and a silent auction was planned for the 20th of September.

They were rather long shingles. I chose mine, initially thinking that I would be inspired by the traces of old stain and weathering that were left behind. My shingle was beautiful and PRECIOUS, a problem for me because these were perfect conditions for "artist's block".

I had to stop looking at it!

I measured. Its proportions were irregular, smaller at the top than at the bottom. I stared at it again and again. Still nothing after days of incubation.

Painful! What was I to do? I grabbed a sketchbook and went outside because the weather was actually decent for a change (a rare sunny day). I drew smaller versions of the shingle's shape on a few pages, my theory being that if I doodled aimlessly within the shape, something might happen. There was also the added advantage that by proceeding in this way, the shingle was no longer in sight. Can't be blocked if you don't see the thing right? 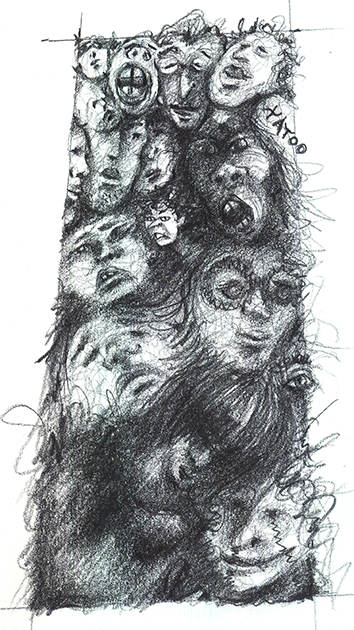 This drawing became the starting point. I scanned it and blew it up to a legal size, black and white laser print. It was a tad light so I increased the contrast. The plan was to make one successful acrylic skin but I ended up making two. I applied a few layers of Golden Soft Gel Gloss to each, and once dry, removed the paper on the back.

It was now or never. I applied white gesso on the shingle (one side only). Gone were the beautiful, precious ravages of time but I figured that if I screwed up on one side, I could always work on the reverse. The background had to be white to bring out the fine details in the drawing.

With Liquitex String Gel tinted lime green (so much for brand loyalty), I created a bottom texture of meandering lines. The lower left-hand portion of the drawing on the skin wasn't clear over the white gesso so I cut up part of the second skin to rework that area. I added colour on the back of the skins and once the paint was dry, glued them to the shingle. I added more colour glazes on top and also tried various colours and textures on the remaining background but wasn't satisfied with the result. I then thought of the old newspapers I had found in my attic. Collage was in order. Adding something from the past seemed to make sense. I looked for lines within the newspapers that echoed the drawing and after adding a coat of matte medium, the shingle came together.

An accompanying text about the work described my inspiration. 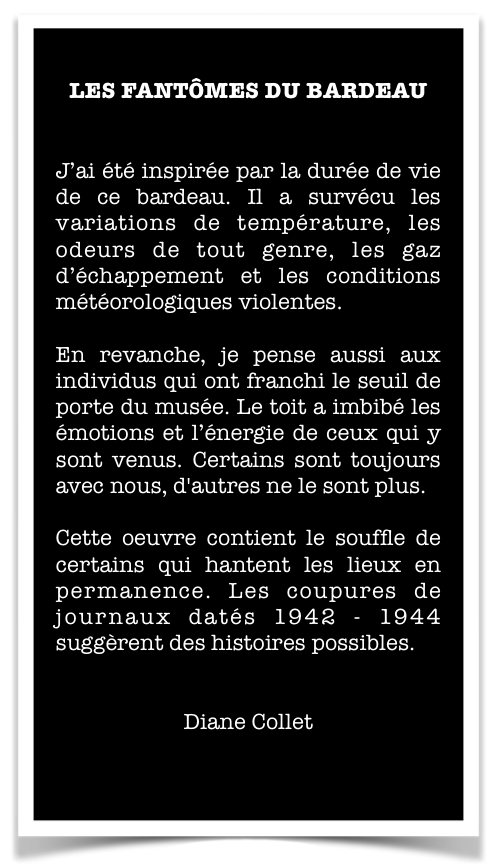 A very loose translation:
GHOSTS OF THE SHINGLE

I was inspired by the shingle's lifespan. It survived temperature variations, odours of all kinds, exhaust fumes and violent meteorological conditions.

I also reflected on those who crossed the museum's threshold. The roof absorbed their emotions and energy. Some are still with us, others not.

This work contains the exhalations of those who permanently haunt the space. Newspaper clippings dated 1942-1944 suggest possible stories.

Have a look at all the shingles that were created on the museum's Facebook page. Fascinating transformations! Imagine a roof built with these.