SHE'S BACK, SORT OF

August 07, 2017
After the great flood of 2017, I decided that my artwork had to be stored elsewhere. I had no idea what lay ahead.

I let my fingers do the walking, sort of.

Gone are the days of the fat Yellow Pages directory. Now my digits can whip across a keyboard and access a list of businesses in any municipality, but it doesn't feel the same somehow. No weight on my knees, no ink smell and not enough...yellow.

Nonetheless after a few phone calls, I knew about pricing. It was time to go and check out each potential space. A fellow artist told me to find a unit close to home. She was quite adamant about it. Initially, I thought it wasn't an important requirement but after checking out various available (and unavailable) spaces in the region, it quickly became evident that it wouldn't be practical to drive twenty-five miles or more to deliver or pick up artwork on a regular basis. I had to find a spot close by. This is me driving, well not really, it's a panel from a triptych called "The Race" but it seems appropriate somehow.

My close friend Claudine and I went to look at a space that was quite a distance away. It was okay but none were available. I added my name to a waiting list. We saw other depots from the outside but didn't enter. They were accessible twenty-four hours a day but seemed prison-like and gloomy with high fences and electronic eyes.  As usual,  I secretly conjured up a tale of isolation and danger. Too much "Castle". Not a good spot for my art.

When my partner moved up to Montreal from the U.S. in 2011, we had to store his stuff until we found a bigger place. He happened upon a clean unit in a building nearby that was staffed by human beings. I decided to go and visit the place even though I knew from a previous phone call that nothing was available.

Funny how things fall into place. Life is like a woven tapestry. Weft and warp threads meet with surprising regularity. The man who greeted us said, "Hey, I know you!" His immediate recognition wasn't mutual but he was right. Having used the services of my previous employer, he was there during my presentations. Hello small world.

I learned from him that storage depots love clients who want to store things for a long time. I added my name to yet another waiting list without much hope but he seemed optimistic that I would get something in short order. Within a month I had a call and a 6' X 12' space on the first floor (no elevators or stairs for me)!  Yippee!!!

Now this is where things became somewhat complicated (for self-imposed reasons as usual). I wanted to do this "works in storage thing" right. Since the space is equipped with a sprinkler system and water seems to like me a lot, I went and bought huge rolls of clear plastic wrap. I knew it would take quite a while to bundle up each work but felt it was well worth the effort. Long term plans include covering everything with a huge tarp when I'm done. One can never be too careful. 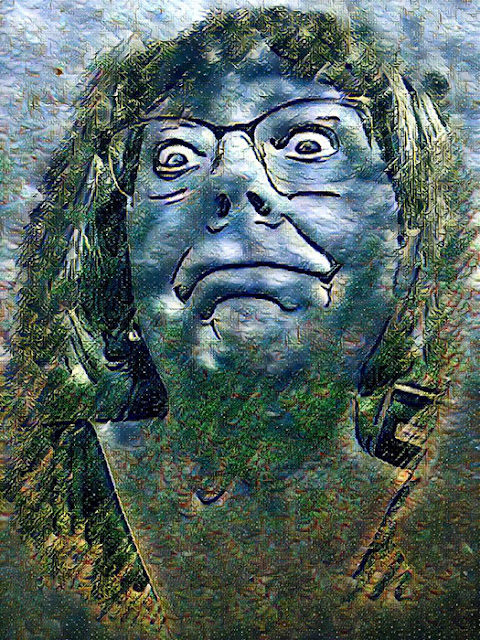 I've also decided to prepare a visual inventory of what's in storage, a good but time consuming plan. Recent works are well documented but my challenge is to find images of much older works. I had slides of most but not all. I hunted through piles of 35mm which were previously in some semblance of order but as the digital world took over, these became, through no fault of my own of course, rather disorganized. (Another upcoming jobbie.)

For the last couple of months, I've been wrapping and transporting artwork. I feel as though I'm moving and the emotional baggage that comes with the process is unrelenting. Curious thoughts surface such as "oh well, if I die, the executor of my will have an easy time of it", or "when my next show comes up, I won't have to wrap!"