WHERE'S NOAH WHEN YOU NEED HIM? (PART 1)

June 14, 2017
I haven't had the energy to blog over the last few weeks. La rivière des Outaouais (Ottawa River) decided to tickle our toes, literally, and we used up most of our stamina trying to cope with what could have been a much worse disaster than in our case, it turned out to be.

It all started out innocently enough.

Most years, the water comes up to the tree in the middle of the yard which is about twenty feet from the edge of the property. Previous owners told us that this happens every Spring but added that because of a super duper dam regulating water flow in Carillon, cresting was now under control. No water penetrated the house during the 9 years that they lived here and we felt this was a positive trend that would likely continue (we were wrong!)

Each Spring, my partner Mart monitors a graph that tells us whether water levels are rising or decreasing. This time the deities played with our nerves a bit. Levels rose higher than normal, surpassing those that we'd previously experienced. For the first time since our move here (5 years ago), we actually had a bit of water in the crawl space. The water table was saturated. Walking on land fronting the river was like sloshing on a sponge.


The Department of Public Works brought us a highly effective pump for the crawl space and put a few sandbags down to protect the property...just in case. 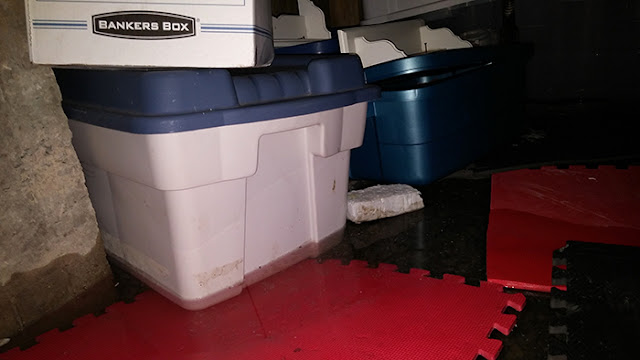 The plastic bins in our netherworld contained a few of our belongings. We checked them out, one had lost its label. We assumed this one was like the others, mainly filled with cans of leftover paint or surplus dishes and cups...nothing especially important (wrong assumption!!!). We brought bins containing important papers up to the main floor just in case something untoward were to happen. I had a nagging sense of foreboding, something in the air felt amiss.

I generally try and look for the positive side in every situation even when it isn't obvious that there is one. With the rising waters came wildlife. They edged closer to the house which allowed us, with our feeble equipment, to take better pictures.

An egret paid us a visit. It was stunning, both at night and during the day. Beasties were unaware of boundaries, totally confused. Some children in the neighbourhood saw a befuddled beaver roaming the streets and kindly escorted it back to the river. Someone else posted a picture on Facebook of a fox whipping down a main road. These wondrous occurrences became the new normal. We were living in a National Geographic miniseries.

Rain, rain and more rain. The river never had a chance to recede. Our house felt like ship on the ocean (with stabilizers). The situation was becoming dire and nerve-wracking. Waves were big and noisy.  An ark, we needed an ark, FAST.....