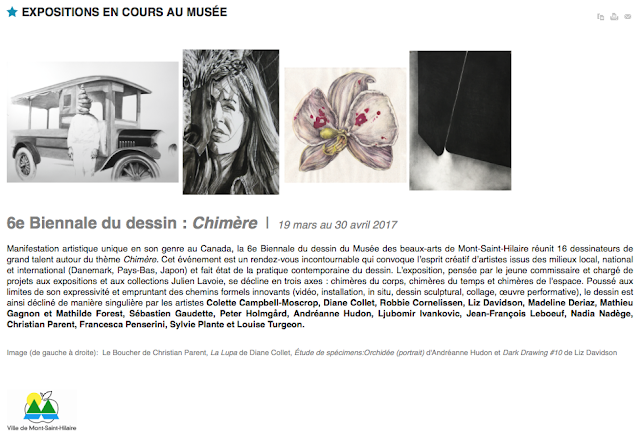 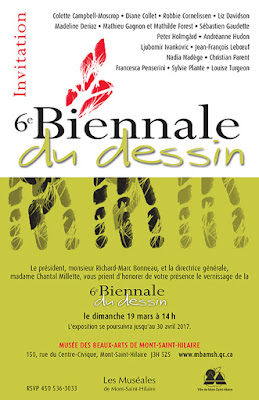 I had two openings this month: the first was for the 6th Drawing Biennale (6è Biennale du dessin) at the Musée des Beaux-Arts de Mont-St-Hilaire. Drawing biennales are few and far between, in fact this is a singular event in Canada. I love to draw and was thankful to be chosen along with 16 other artists.

The theme of the show is Chimère (Chimera). The Musée printed up a catalogue with accompanying texts by Julien Lavoie who curated the show. What follows is a rough translation (French to English) of what he wrote about my work.

The imprint of time, the traces of its passage on bodies as they appear in the Ruins of Diane Collet, is an inevitability that affects both nations and individuals.

Chimeras of time are tenacious; in addition to weighing down bodies, they torment the mind and erect the heyday boom years of youth in the golden age.

The Italian Renaissance for example, found  a kind of cultural ideal in antiquity that could be reinterpreted and revived as the flavour of the day.

It is by drawing from the ruins of ancient times and by learning aesthetic concepts as defined by Greek philosophers that remarkable works like those of Leonardo da Vinci and Raphael, symbols of the attainment of genius by a people, were made possible.

Finding ruins is certainly more difficult and less exciting than the idea of a rebirth.

In this series of drawings which have aging as their theme, Diane Collet writes: "These drawings are self-portraits transformed by merging my features with those of statues or prehistoric objects." Her face is found among crippled Doric columns and statues in a pitiful state.  Bordering on caricature, the face presents a pathetic expression, which is not devoid of this "somewhat disconcerting" humour that one finds with Collet.

In La Lupa's bewitching eye, we perceive a background of mystery and mischief without really knowing what is hidden there.

In this instance, the arrogance of a young seductress speaks through a representation that the viewer catches in passing, as one perceives a lost gaze in the midst of a crowd.

Knowing that La Lupa is a vengeful and murderous femme fatale taken from a novella by Giovanni Verga and made into a feature film by Gabriele Lavia, we edge nearer to the mystery surrounding this portrait, whose setting, chosen by the artist, recalls portraits of criminals sketched at the exits of courthouses.

Ruins and La Lupa share the same depths of darkness and the resulting images are intercrossed by instinctive undercurrents that Collet crystallizes into ephemeral insights and fleeting impressions.

From there to suggest that these moments of transfiguration seized by the artist are times when reality is suddenly highjacked, revealing a being surprised in her full truth, and who transcends time to embody a universal emotion, and only part of the story.

I really don't think my translation did this text justice but the gist is there. The catalogue is available at the Musée.

People reacted very positively to the show. The Musée's space is theatrical, lights hover over the artwork and the effect is magical. Here are a few photos of the event.


The Biennale runs until the 30th of April 2017 and is well worth the visit.

I also participated in the Dollard Centre for the Arts Faculty Exhibition "Guiding Lights" at the Galerie de la Ville. This yearly event is a wonderful opportunity for teachers and students alike to appreciate the practice of the teaching artists. I decided to exhibit a selection of what I've been doing lately including a couple of drawings, a painting and a digital print.

This show runs until April 23rd. More information is in press release below. 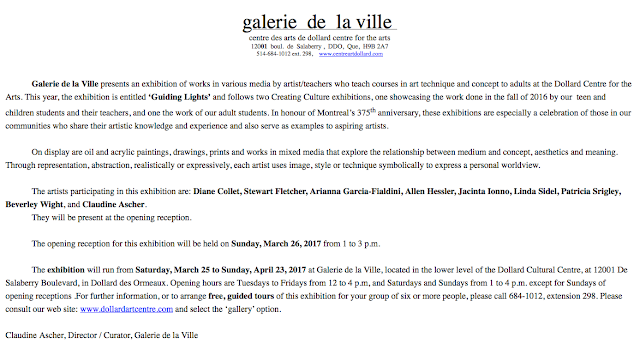 March was an exciting month and another interesting, special event is coming up in April.  Stay tuned!