February 07, 2017
Claudine Ascher is one of the most accomplished individuals I know, gifted in so many respects. It's easy to draft a list of positive attributes to describe her: intelligent, assertive, fearless, dedicated, kind and extremely creative.

As a gallery curator and educator, she has made significant contributions to many an art career, but as an artist, she never ceases to astonish and inspire. Her singular skill as a clay sculptor / draughtsperson coupled with an innate penchant for the phantasmagorical alter our perceptions of reality. We are compelled to burrow through the wormhole of her imagination to arrive, emotionally altered, at some unexpected destination.

Ascher's background in theatre, design, fiction writing and dance feeds her creative process. Notably through the latter, she reveals her exhaustive knowledge of the human body, shows us how it moves and interacts within a three-dimensional environment. 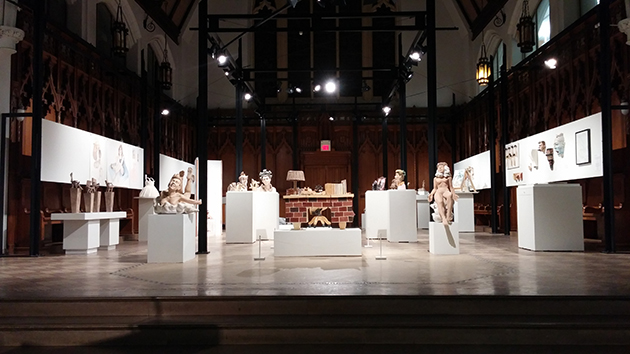 I've seen Ascher's sculptures and drawings in various settings over the years but the mise en scene at Le Musée des Maîtres et Artisans du Québec is a perfect backdrop for her work. The space brings out the stunning beauty and subtleties of each piece. Formerly, the Musée was a Neo-gothic Presbyterian church which went through a couple of transformations, from Catholic chapel to the singular museum of today. The magnificent never-ending dark wooden trusses, large stained-glass windows and artefacts relay the building's history and spiritual traditions.

Clay is a naturally-occuring, organic, building material as is wood.  The "communion" of clay sculpture, unframed drawings and wooden beams in this otherworldly space is breathtaking. They were made for each other.

Ascher's work is largely autobiographical yet universal. Born in Egypt, her early childhood was spent in Brazil after which she immigrated with her family to Canada. She coped with the deep-rooted struggles that come with adolescent displacement. There is way more to resettlement than merely learning a new language and customs. Introspection inevitably comes with the territory. 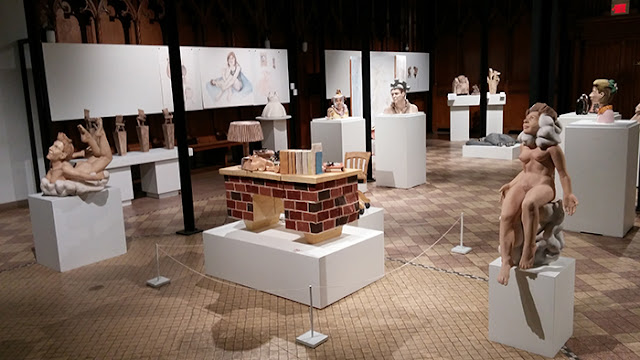 Falling angels greet us on each side of the space. They sit or flop on clay clouds.  Who but Ascher would even think of making clouds out of clay? "The Bomb" and "The Belly Flop" refer to the fallen angels of literary fiction but these are not unhappy sinners cast out from heaven. They are women who seem to be enjoying the fall. Ascher puts a new whimsical spin on a well-known tale which invites deeper reflection. Shall we give into temptation?  The answer is a resounding yes!

Ascher loves a challenge and this is evident in her mastery of trompe l'oeil. All that she creates, tools, furniture, clothing and more look deceptively real. But it's all an illusion. "If Narcissus Could See Me Now" is an incredibly fragile vanity made of clay. Lipsticks, creams, perfumes and other cosmetics/tools peddled to improve the appearance of women float in the choppy seas of the dressing table's surface, while in the mirror, a hand reaches out of the water. Someone is drowning. A lonely dress shoe, also in clay, lies discarded on the floor.  Emotional turmoil surfaces as we unwittingly peel the impassioned layers that haunt the work.

This powerful sculpture is nearly life-size, 44” high, 24” wide, 12” deep and coloration is achieved exclusively though glazing.


"Autobiography" below is a phenomenal pièce de résistance. Books, an old-fashioned dial phone and slides (remember those?), a lamp, binder, paper, pens, stamps, file folders, partly used paint tubes, a desk and chair as well as other sundry objects that describe an artist's career all seem authentic. The scale of the work is impressive when one considers the size of the average oven used to fire ceramic sculpture.

I'm tempted to pick up a sheet of paper until the realization hits!  This thin slab is made of clay.  52 elements combine to create the illusion that someone has just stepped out to get a cup of coffee.

Many of us live with some kind of elephant in the room defined as an obvious problem or difficult situation that no one wants to talk about. Ascher creates a powerful visual metaphor by juxtaposing large, delicate drawings of three elephants on a folding panel against a small ceramic sculpture of a young girl's dress perched on a transparent plexiglas podium. A tiny pair of shoes is placed underneath the dress on a smaller white podium recalling the proportions of a child that cannot be seen.  Perhaps the invisible little girl resides in all of us. I feel like Munch's "Scream".


To say that all the works in this show are compelling is an understatement. In the "Waiting Room" below, a series of chairs acquires human attributes.

I relate to these works at a very fundamental level. Waiting is a national pastime in Québec, especially when dealing with the medical system. The sick and weary wait, and wait, and wait, until they are permanently glued to their respective chairs. When names are finally called, body parts rip off the core and are left behind. Humanity remains permanently mutilated in a world devoid of respect.
Ascher adds to the visual experience of this exhibition via bilingual (French and English) poems/prose which accompany some of the tonal works.  Her writings about the "Waiting Room" are revealing:

All that waiting, all that not knowing,
all those moments suspended in time,
neither here nor there.
It’s a process, after all.

There is a moment when substance and spirit align,
When where feet tread, and what hands touched
Matter more than the not. 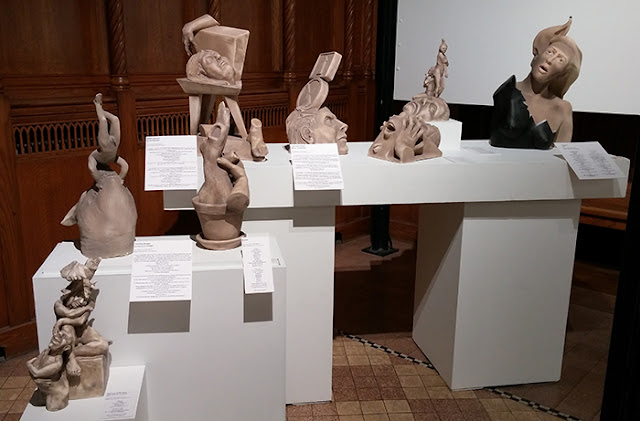 "Insomnia" below is one of the works in the grouping above. I am reminded of a famous quote from Shakespeare's Hamlet : “To die, to sleep – to sleep, perchance to dream – ay, there’s the rub, for in this sleep of death what dreams may come…”

...but Ascher's insomnia asks "Are we ever truly awake?"


There is a difference between
sleep and wakefulness?
Really?

Am I awake now?

Claudine Ascher shares intimate stories that pinch a universal nerve. The power of the work lies in its vulnerability and compels us to look within ourselves.

This exceptional exhibition runs until the 26th of February 2017 and is an event that should not be missed.