DRAWING IN THE CITY, SKETCHING IN SUBURBIA

December 16, 2016
Living in the suburbs has its advantages. Life is a bit less hectic in the boonies; the environment is greener, the air purer.  But downtown is generally where the action is.  Getting there is usually no big deal but it does seem like a production in the middle of winter.  Depending on the traffic and weather conditions, it can take anywhere from 40 minutes to two hours to get to our favourite metropolis from here in Vaudreuil-Dorion. During a snowstorm, one might never make it there at all.

Thanks to CBC radio morning host Mike Finnerty, many now refer to Montreal as "orange cone city". Navigating the roads is a challenge.  Our urban centre is a zoo because of huge infrastructure projects all going on at the same time.  Overpasses are being torn down and rebuilt and many roads are dug up to upgrade old sewer systems that are falling apart.

On top of all this, Montreal has always had an interesting approach to one-way roads.  There can be up to three in a row all going the same way.  It's sometimes possible to find one going in an opposite direction after driving around in increasingly larger squares for 15 minutes or so.

On December 3rd, my artist buddies and I decided to participate in a "Model Drawing Happening" organized by Artneuf in Montreal.  Because of multiple detours, we got lost in Verdun, which is no where near the Parc Lafontaine area.  Luckily we managed to make it with time to spare.

The event took place in a theatre. Under staged lighting, 5 models took a variety of poses.  They mostly posed nude or partially dressed, some used props or draped sheer fabrics around their bodies. They were extremely agile and flexible, and the scenes they created were delicious in colour, texture, and drama. There were many artists and no easels which meant that we could only draw in our sketchbooks.

I sat at a distance. Pen markers allowed me to work quickly and I had to live with whatever lines I put down. As usual, some drawings were good and others were horrendous.  It takes a while to get going.  We warmed up with a few one minute drawings. I often wish I could warm up for hours.  I love quickie drawings. They are so animated!

In order to avoid creating drawings that were overly tight, I decided to do a semi-blind contour drawing to continue loosening up.  It's always a challenge to find the right balance between expression, elegant lines, and some degree of accuracy (or not).

There are also wonderful things to draw in the suburbs.  Karine Francoeur was inspired by Urban Sketchers and decided to form a group in our outlying region called (Sub)urban Sketchers V.-S.  Four of us met for the first time on November 27th at the Musée Régional de Vaudreuil-Soulanges. What we didn't have in numbers, we made up for in energy.

This being Québec (rather on the cold side), we decided to draw objects that were inside the museum.  One of the interesting exhibits on until August 6th, 2017 is entitled "Au coeur de la Papouasie - Une périlleuse expédition de Daniel Bertolino" which roughly translated means "In the heart of Papua - A perilous expedition by Daniel Bertolino".  A documentary filmmaker recipient of the Order of Canada, Bertolino brought back some unusual objects from Papua New Guinea.  I was especially enthralled by a sacred mask made from the skull of a wild boar and spent a great deal of time drawing it. 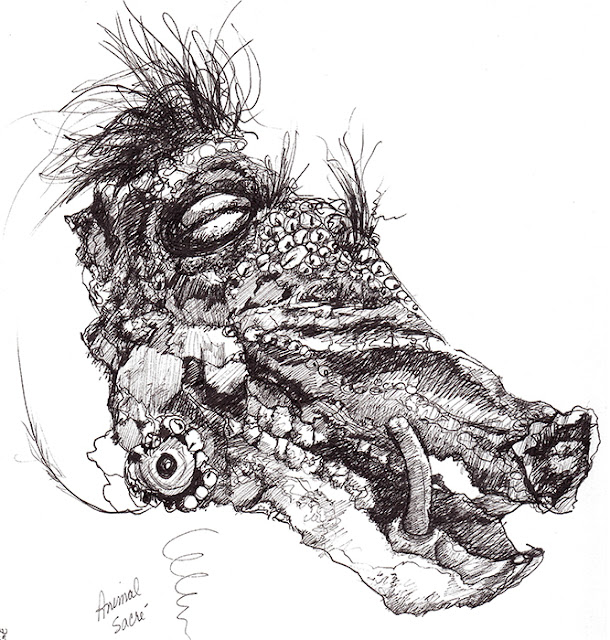 "Whoda thunk" I would come across a sacred skull mask from Papua New Guinea in suburbia?

The group is hoping to grow and meet once a month in different locations within the region. We are opting for indoor opportunities during the winter months since none of us appear to be terribly excited about drawing outside under freezing conditions.  I guess it all depends on what comes into our field of vision.