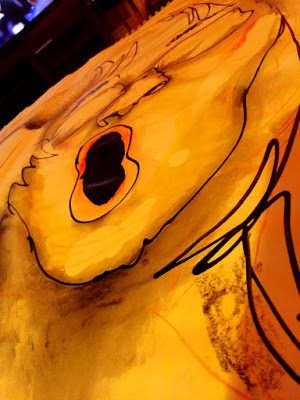 Two dimensional artists who work in a realistic style use perspective to suggest three dimensional space and shapes on a flat surface. This is done to mimic our way of seeing in stereoscopic vision. Interestingly, perspective is a type of distortion that magically creates a convincing illusion of reality.

Distortion is also an integral part of the expressionist's and surrealist's repertoire. I've already written about my passion for oversized, solidly-planted feet.  Exaggerated or extremely foreshortened poses can convey drama and emotion. Emphasizing facial features by varying their size and shape animates characters with unpredictable countenance and personality.  Think Cyrano.

Applying distortion to innervate or to make a statement is quite different from the warping that happens when a person lacks the skill to draw or paint something.  A distorted object or character should make the work more forceful than it would be otherwise. 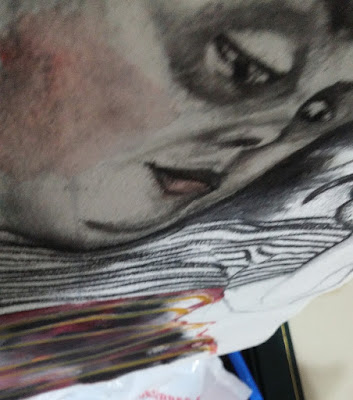 There are many ways to achieve distortion. Two that immediately come to mind are the grid and blind contour.

Lately I've been experimenting with another way, photographing drawings and paintings from unusual angles to arrive at unexpected results. Purposefully taking pictures of my work from above, below or sideways is stimulating this old noodle and leading to new ideas that I may someday use in future paintings.  My camera is always nearby in case I'm in the mood to play, which generally happens when something is drying oh so slowly.

The originals of these "in progress" works are very different from how they appear here. I generally distort shapes or characters  to express emotions that relate to a theme or idea.  In photographing works from an unexpected angle, another layer of distortion is added.   It's a great way to get a new "slant" on things.  The approach often changes the entire mood of a drawing or painting. Fascinating!

I know the image lower left is reminiscent of aliens on Star Trek but the exaggerated head has a hypnotic air. The stripes are wavy and moving, hopefully in the right direction.