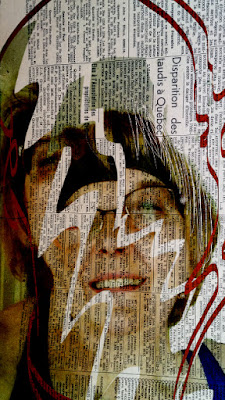 I'm seriously involved in a couple of art projects and find myself torn....

Should I write? (I'm neglecting my blog.)  Should I paint?  (I'm working on a piece but must put it aside for now.)  What are my deadlines?  Can I meet them and still do everything? Can I forego a few hours of sleep tonight?  Will it affect my energy level?  What about applications for shows, publications, other venues?

Time management is important. Getting sick is not an option.  (It took me over two months to get over that nasty virus I picked up in California. A friend told me that according to her doctor, it becomes more and more difficult to shake bugs off as one gets older.  Any more good news?)

What is fascinating about a career in the arts is that so much of what an artist does is unrelated to the actual act of creation.  In my previous "day" job, I had a relatively high degree of variety when it came to counselling, but a good part of my other functions were routine and familiar.

With art, variety is a constant.  Besides creating, the job of "Josephine Artist" entails: administration, accounting, marketing, writing, sales, negotiation, teaching, research, purchasing, public relations, networking, and event planning.  I'm sure I'm forgetting some.  Artists aren't necessarily good at everything but we certainly are versatile.  Torn is far better than bored.