THOSE WHO INHABIT THE PLANT

March 22, 2016
After months of doing digital work, I'm back to getting my hands dirty.  While technology seduces with its potentiality, it has limitations.  Art software provides unusual solutions to problems quickly but at a cost. What's missing?  Odours, mistakes, unwanted fingerprints.

In a previous blogpost "The Family", I wrote of being inspired by a project that I gave students in my creativity class.  After drawing "The Brussels Sprouts Family" in pen and ink, I was motivated to push the idea a bit further.

The process has been an odd one, an experiment of sorts. I bought little plastic bottles, a new product that I recently discovered at the local art shop. The containers function as markers when filled with paint, either acrylics or watercolour.

For the multimedia drawing below, I mixed fluid acrylics with airbrush medium (half and half); a bit too runny for my taste but I thought why not let the paint flow à la Jackson Pollock? I made a very wet, uncontrolled outline of a brussels sprouts plant to create a cloisonniste effect (used extensively by Émile Bernard, Gauguin and Rouault). I let it dry, it took forever. Then I arbitrarily applied thin coats of watercolour here and there and waited some more.

I started at the bottom and worked my way up. The lower sprout shapes were spaced further apart than those higher up the stalk.  Close up shots reveal how the work evolved.  I studied each circle and let the colours and lines trigger ideas.  Each little cabbage head reminded me of individuals.  Using archival markers, watercolour and acrylic paint, I began to forge characters. 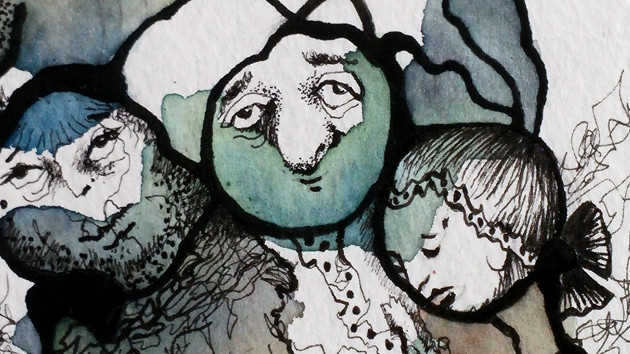 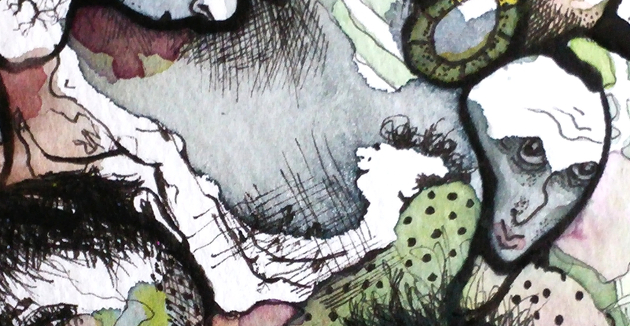 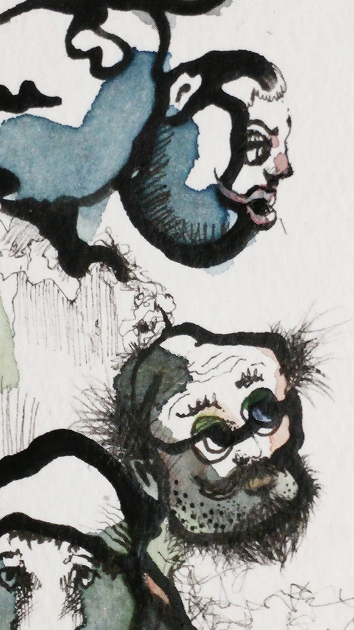 The fellow below initially reminded me of a samurai warrior. A metamorphosis happened and before long, he grew into a wonky Major General from the Pirates of Penzance. 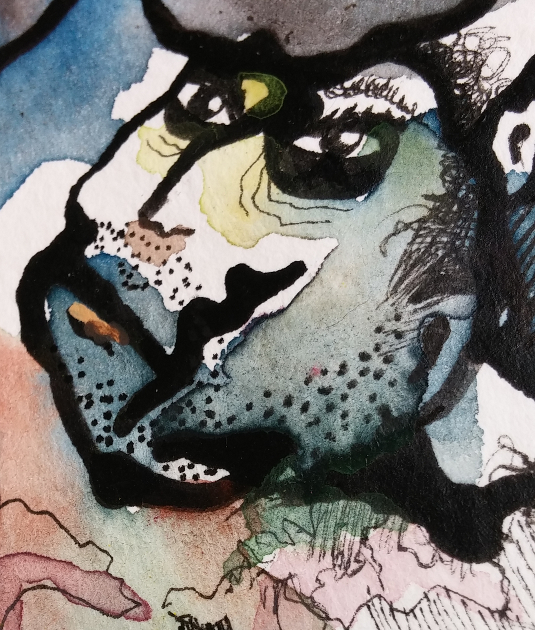 I enjoyed coming up with five o'clock shadows and hairy bits.  Males tend to have more of the latter except for young American men who now seem obsessed with the removal of their body hair.  What a shame.  Tom Selleck's chest is way more fun to draw. 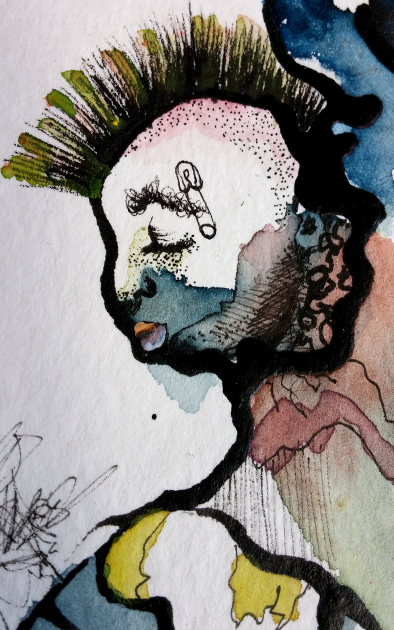 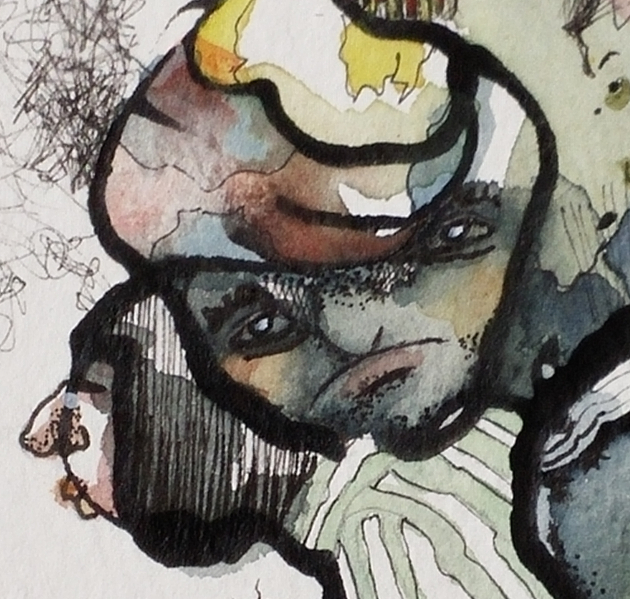 Odd personalities from Dickens, Victor Hugo, Hokusai, Da Vinci and Ralph Steadman simmered in the cauldron of my psyche. The safety pin on the punk on the right appeared after I recalled one of my former students coming to class with blood on his cheeks.  Worried (in mother mode), I asked him what was wrong.  Craving another piercing, he had hastily incised his eyebrow with a safety pin.  I never forgot him. 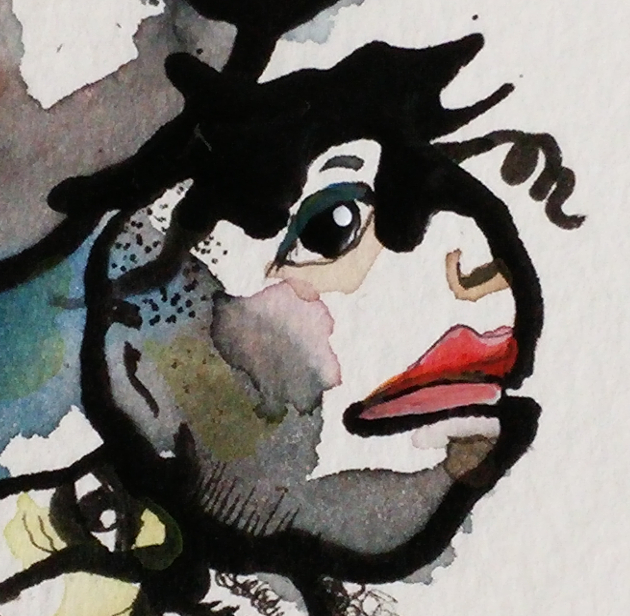 Humans often resemble other living creatures. The individual above seemed frog-like to me. The spherical shapes in the upper part of the stalk grew larger. Each bit player became more complex and modern. 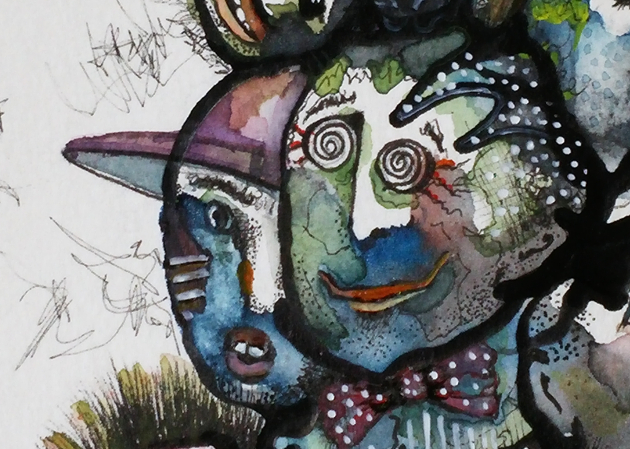 The top of the plant is asphyxiating.  Tangled heads are wedged into a small confined area.  The diameter of the stalk is underdeveloped, not mature enough to provide a comfortable distance for its inhabitants. 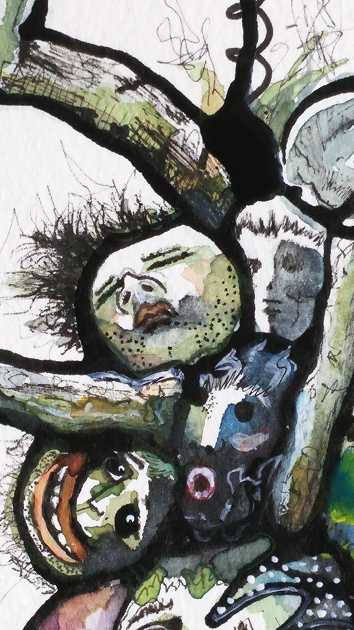 Below is the finished work.
Much is packed into this 8" X 16" sheet of paper.

Small is sometimes long and thin.