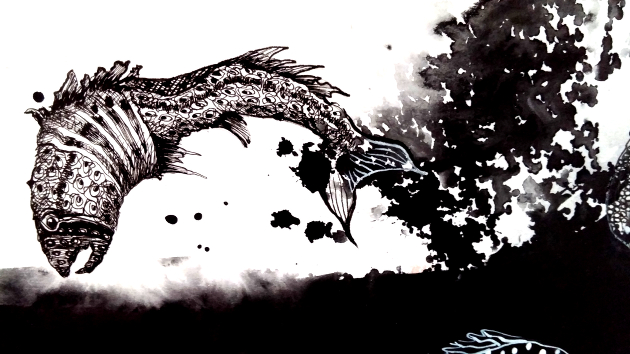 Maybe she was going blind.

The water was crystalline at the start of her journey.  Vibrant hues flittered around her.  She was tempted to stay but forced to move on.  She was on a mission.

Consumed with compulsive fire, she torqued and leapt as high as she could.  Hmmm…no problem in air.  From up here she could see just fine.  Darn!  Why wasn’t she favoured with flamboyant wings like those who tried to eat her?

Things worsened as she advanced.  Colours turned gray as black pools claimed the water’s surface.  She ascended once more for reconnaissance purposes.  Yes, the trees were still green at the top and brown at the bottom!  The stones were silvery but darkened near the edge of the stream.  She dove back in but no matter how much she stretched her eyes she still couldn’t see.

Home had a special smell, but the perfume of her origins evaporated as the water became increasingly opaque.  A revolting, sickening odour lassoed her face, burned her mouth and tasted strange.

She attempted a “leap and turn” but was quickly carried forward by a multitude pushing furiously behind her.  These followers, unable to think for themselves, were also heading home.

Blinded, smelly and fouled, she surged upwards once more to scan the region.  A pond bordered the looming rapids.  Risky!  Serious flapping across six feet of land would be required to reach it.

Her belly was engorged.  She felt hopelessly clumsy but had to try.  She wriggled as best she could through the salmon congregation and inched towards the embankment.  A final leap should do it.

Her eyes felt it first, “cool, clear water… water…water…” but she had no time to revel in its clarity.  She found a crevice and lay her eggs.  Spent, she slowly drifted to the surface.

Claws and infinite darkness were waiting.   Pain pierced her neck.