A CITY OF SMALL MEN

It was routine on hot, summer nights. The two and a half block teen parade began at about 7 pm on Fridays at the north end of Main Street until one could see City Hall.  Most stopped about a half a block before reaching the light gray building and performed a quick about face ahead of the others to speed up the return saunter.

The best part of the walk (other than fulfilling the main objective described below) was passing in front of the Auditorium and Roxy Movie Theatres. The facades were far from fresh.  Depraved yellow or beige, they seemed raunchy, forbidding, yet somehow strangely inviting.  Roxy in particular was foxy for a building.

The ambulatory loop went on for hours until all hungry eyes dematerialized.

It was the only way to evaluate the availability and quality of young males. Our discriminating female minds quickly scanned the face and body of one, then another, until each half-grown hunk had been tallied, meticulously recorded on an imaginary spreadsheet, and put through fanciful data analysis.  Within thirty minutes, the sort was completed and possible prospects were catalogued from hot to cool.  It didn’t take long.  It was a very small town.

The process was reciprocal.  Boys undertook a similar audit although I suspect their criteria were not quite as stringent.

Regular analysis never amounted to much.  I had to be home by nine, ten at the latest.  We were too young to fully understand why we were participating in the procession.

After a while, a problem became evident.  The boys were short, in fact I had a foot over most of them.  I lived in a city of small men!  In the name of femininity, I had to leave or else I would forever feel like a football player or worse, a refrigerator, the largest appliance in the kitchen!

I wasn't that tall, just a tad above average at around 5' 7", but I was predisposed genetically to stand a head above the crowd like my grandfather.  This is part of my mom and dad's wedding picture.  Tall Grandpa Joseph towers above everyone behind my mom. 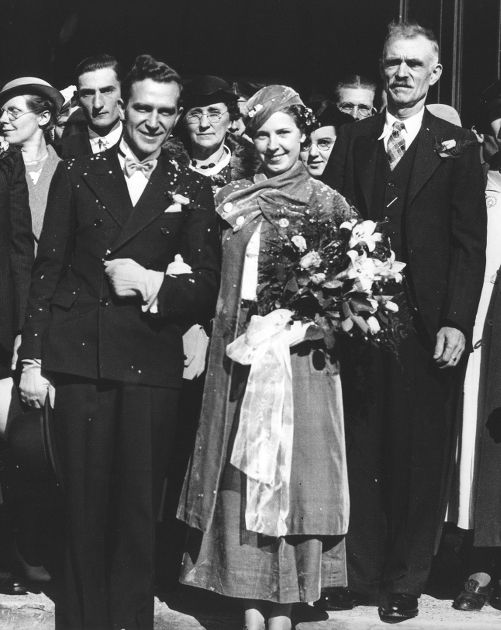 Imagine my joy when at 17, I moved to Montreal and discovered that some men were actually taller than me. It all sounds terribly superficial but seemed important at the time.  I'm still writing about it for Pete's sake. (Who the heck is Pete?)  The experience obviously scarred me for life.

Years later I returned home for a couple of high school reunions.  I was shocked to find that some small men had grown and conversations could now take place at eye level.

Memories of this perambulatory ritual remain fond ones despite my adolescent frustrations. The sights, sounds, smells, and emotions of youth are astonishingly powerful.  I recall my dad telling me that flashbacks and dreams of his childhood became increasingly frequent and vivid as he aged.  He could barely walk but during his nighttime reveries, his legs sped across honeyed fields to fire up his body.

The inner child sneaks out at night to make things bearable.  How wonderful is that?