A MYTH OF SORTS

October 09, 2015
He dumped the world into an old rusty bucket.  Brimming with oils, fungus, and reeking of poisons, it had to go, and fast.

“His Heaviness” was a gigantic immortal who weighed more than all the immortals combined. The latter were infinitesimal beings woven together like fabric to become the surface on which “His Heaviness” walked during his occasional jaunts. They let out collective whimpers as they sank under his sauntering mass.

Always considerate, he tried to compress different individuals as he made his way.  He understood that each entity took a long time to recover its shape after he had trod upon them.  Some were doomed to remain forever misshapened, but they took it all in stride.  His travels were infrequent and always for a good cause.

Although known to everyone as “His Heaviness”, his real name was Erroneous.  How he came by this name was a mystery because Erroneous, the greatest of higher powers, was rarely wrong.

Rarely of course means that he occasionally made mistakes but they tended to be minor i.e. accidentally squishing someone’s face or baby toe en route to his destination.

Despite his remarkable track record of successful decisions, Erroneous still worried about those he had yet to make.  He wondered for instance, if it had been wise to dump the world into an old rusty bucket.

Legend had it that a pink deity with a penchant for cleanliness lived at the edge of his sagging cosmos.  Everyone knows that legends are sometimes untrue, but Erroneous had a feeling that this one was plausible.  He decided to investigate.

The journey was long and extremely painful for those who were flattened during his explorations.  After many days and nights, he caught sight of a finespun veil of pink and orange hovering in the distance.  Sadly, in rushing towards the pastel outpost, Erroneous destroyed the few excess limbs that the tightly woven web of immortals had kept aside as replacement parts.

Without warning, a powerful wash of colour enveloped him.  He began to float like a feather in a draft.  Never had he felt so light.  The bucket barely hung from his fingertips.  Erroneous tried to speak but his voice was muffled.  He mouthed "the bucket, the bucket" over and again.

Suddenly he saw her.
She was magnificent, massive just like him yet as light as a snowflake.  She gently snared the bucket and poured the filthy, oily sludge into a monumental washing machine. The vibrations of its motor echoed throughout the cosmos.

As the contents in the machine brightened, “Her Ponderous Pinkness” (as she was known), began to transform.  Tender shoots, leaves and moss sprouted up her right shoulder and long, slender neck.  Vibrant sun-tinted flowers burgeoned on other parts of her body. 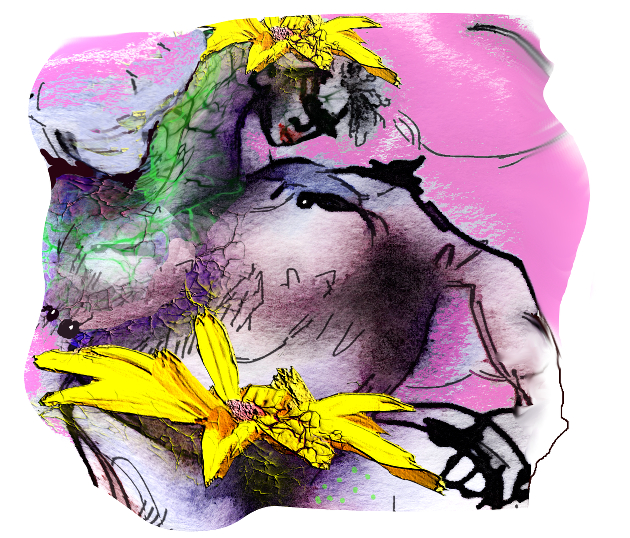 The fog blushed a deeper rose.

Erroneous wanted to stay with her.  He even thought of changing his name to Erogenous.  He was tired of being lead-footed and unwittingly hurtful to the magnanimous members of his community.

“Could I stay and help with the laundry?” he whispered.

They became close friends. Erroneous loved washing dirty, smelly things!  He felt useful and no longer needed to walk on others, make decisions, or live with the heaviness of his body.  He read "The Sacred Book of Immaculateness" and mastered "The Art of Laundry".  Over time, everything he touched turned lily white including “Her Ponderous Pinkness”.

She eventually changed her name to Blanche.