July 09, 2015
Scale:
A single plate of many that covers a reptile;
A frustrating metallic-type buildup on kettles and bathroom tiles;
A weighing device to avoid at all costs when depressed;
To climb something high, like a mountain;
...and
a system of measurement that artists wrestle with. 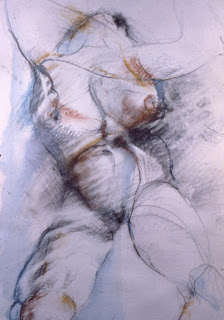 Many works in museums tend to be large-scale.  In 2011, I went to see a Fernando Botero exhibit at the delightful Toledo Museum of Art in Ohio. I had always enjoyed Botero's work via reproductions in books but viewing the originals was another experience entirely.  Many of his corpulent figures were bigger than life size and created a dynamic, overpowering and other-worldly ambiance in the allotted space.  It was phenomenal.

That's the power of large-scale artwork.  It becomes the room and is seldom "underwhelming".

Finding brio in small work is the bigger challenge.

At university, we generally used large sheets of paper and canvas for drawing and painting.  My model sketches tended to be expressive as I poured out years of suppressed adolescent angst.
When I started out as an artist, I took a lot of room and used my entire arm to make lines. The paper never seemed big enough. 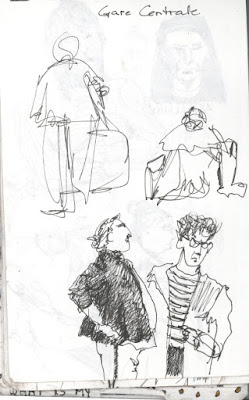 I felt muzzled when I drew small, and it showed.

Things became increasingly exciting when I discovered pens with tiny nibs. They were known as rapidographs and were used primarily by architects and designers. They clogged up easily unless they were meticulously cleaned after each use (not my forte). I wrecked a few but eventually managed to keep them flowing. The limitations of these pens became obvious as I tried to obtain variations within each line. It was near impossible, but nonetheless, using them gave me confidence.

Painting small was way more difficult.  It suddenly seemed as though my work was done by someone else.  I finally figured out that while small drawings benefitted from using minuscule tools, painting with tiny brushes didn't work for me.  Everything became painfully precious.  My arm muscles longed to swing in flamboyant arcs.

I had to find a way.

After much experimentation, I tried larger brushes.  Strokes became more dynamic as I freed my inner critic. I devised a method of sorts:

While it may not be a method that works for everyone, it did for me.  I obtained the effects and spiritedness that had previously only happened on a large scale.

Tiny paintings are like jewels that shine against a long bare neck.
Sometimes a little goes a long way. 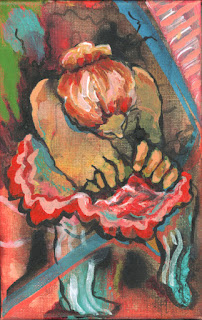 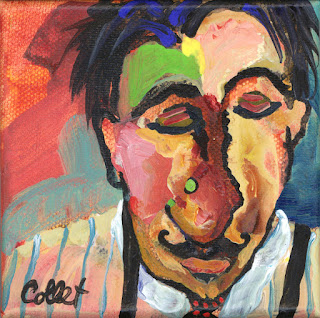