May 17, 2015
Nature repossesses her environment at the slightest opportunity.  As soon as the weather warms up, plants eagerly stretch towards the sun, nasty red ants (they bite!) build craters of sand near stones and trees, male red-winged black birds squawk and dive to protect their nests, and an army of  other creatures moves into the neighbourhood.

In previous posts, I wrote of the many unexpected visitors that have graced our property since we moved in three years ago. The list includes bullfrogs, groundhogs, foxes, metal-pecking woodpeckers (loud peckers attract more mates), field mice, snails, and of course, legendary racoons. It's rare to have encounters with wild animals because most of them have the sense to avoid humans.

Our friendly neighbourhood cats also visit regularly and probably keep many wild things at bay around here. Recently they failed us.

The back door was open and I suddenly noticed an animal peering into the house through the screen. I initially throught it was one of our neighbour's cats, but this one seemed larger than either Arthur or Oreo.  I stood up, edged slowly towards the door, and came face-to-face with nature's version of Zorro.  In spite of its exceptional appearance, I really didn't want it on my stoop.  I  assumed it would scoot away as soon as it saw me but no.  It looked right at me with calm, cool, collected eyes while I felt anxiety knot in my chest.

I called my roomie and sure enough, he had already spotted Rocky through his office window.  We both dashed for our cameras and started to shoot.  It was a fearless creature who scratched a lot, washed itself repeatedly (I had no idea they were so "up" on hygiene) all the while casting the occasional glance at us. 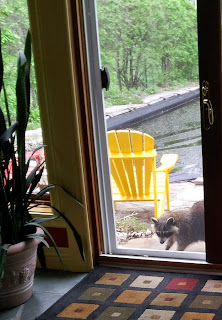 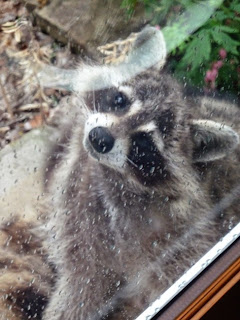 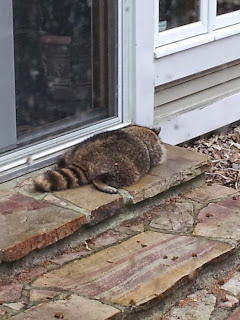 It was an incredibly sleepy animal who decided to nap in a number of unusual positions at our door.  At one point, its head hung over the step like a tiny sack of potatoes.  We wondered if it might be sick.

Was it male or female?   It soon became apparent that Rocky was a "she" as her belly was alive with nipples. 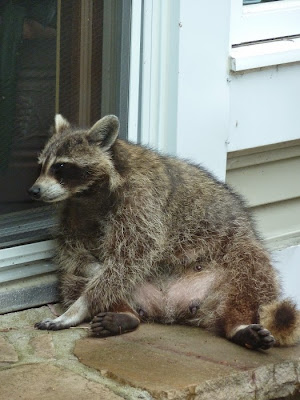 She snoozed for what seemed to us an interminable time.  We really didn't want Roquette to move in and feared that she might be pregnant because of her uncontrollable  urge to sleep.

In a moment, everything changed.  She awoke perfectly rested out of a deep slumber, took a few guzzles out of our yet unopened pool, and nonchalantly wandered off never to be seen again.

Lovely as she is, I hope things stay that way. 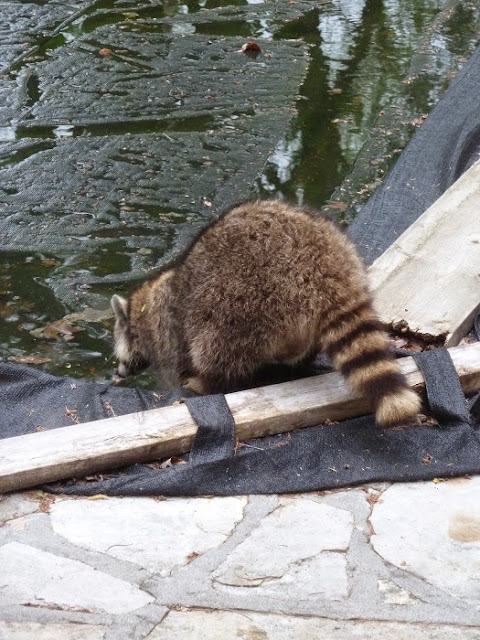