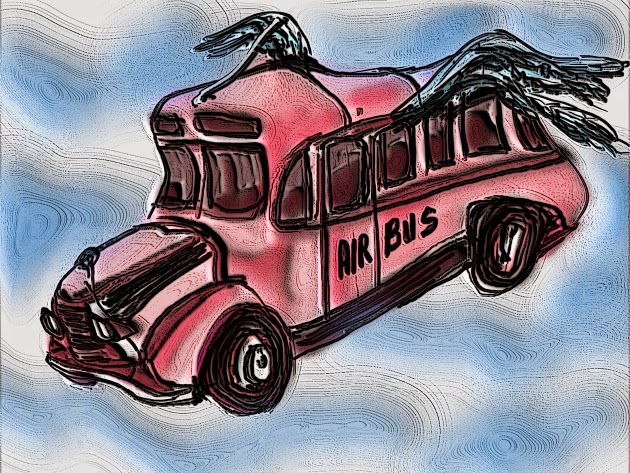 2015
I am still amazed at how commanding, man-made, vividly-coloured metallic birds manage to soar through our skies.

Physics was never my forte.

Like many, I prefer terra firma, but I've never been one who, in pre-flight terror, clutches the nearest airline employee for dear life in an attempt to avoid boarding.  I am generally reassured by smiling flight attendants who emit an air of total calm as they prepare one and all for take off.

1969
My first flight ever, and the always attractive stewardesses (beauty was on the list of hiring criteria then) were young, fearless, unmarried women who were oblivious to the pitfalls of risk taking.  Airlines attempted to make the trip delightful and civilized, a brilliant strategy to maybe help passengers like myself, forget that we were actually soaring at 20,000 plus feet above the planet.

My long legs were nowhere near the seat ahead of me.  I could wiggle in my chair and grab a safety belt without scraping my hand against the rough, durable fabric. The aircraft interior was in nearly pristine condition and free food arrived in little warm containers filled with delicacies prepared by airline chefs!

Flying is no longer what it was.

2015
I recently returned to Montreal from Austin, Texas. The flights to and fro were okay, late coming back because we had to wait for a good part of an hour in Detroit while a technician repaired a couple of overhead bins.

I was happy to have leg room on the first part of the trip back (until the stopover) because my companion and I were seated at the emergency exits.  Strangely, the more we inclined towards the jet stream, the colder I became. Initially I ignored it, assumed that my imagination was overactive or that the air conditioning was on full blast.  As time went on, my right thigh felt as though I had left it in the refrigerator for thirty minutes and my toes recalled the sensation of driving a rusty Volkswagon Beetle in twenty below weather.

Cold air was seeping into the cabin via the emergency exit door.  I borrowed my partner's winter coat and wound it tightly around my legs to keep warm.  Before long, condensation launched a steady stream of water from the window down to my shoes.  Not exactly what I would call a high-end experience.  What happened to the colour coordinated blankies and pillows?

Free service included tiny bags of either pretzels, peanuts, or chips along with water, a soft drink, or juice.


Are you trying to stay hydrated?  Here!  Have salty food!
Do you want to keep your blood pressure down?
Tough titty!

Other beverages, meaning booze, had to be purchased. Part of the rug-type material edging the seat in front of me was torn and suspended directly in my line of vision.  The button to lower my companion's seat was nothing but a hollow orifice.  He could fit his finger inside quite nicely but it was useless for its intended purpose.

A nonstop creaking sound worthy of a Vincent Price  horror movie enriched the drone of the plane.  I would quickly return my car to the dealership if it had that kind of rattle.

1961
These happenings brought to mind memories of the city bus rides I took to get home from high school.

Drivers had a knack of pushing a little too hard on those brake pedals to simulate turbulence! The occurrence was especially challenging in situations where there was nowhere to sit.  I had to stand and white-knuckle grasp an overhead bar to avoid a solo flight towards the rear of the vehicle.  I landed on my face a few times.  It was not unlike returning from the airplane loo but not quite reaching one's seat during a one thousand foot drop.

The air inside buses was foul, especially in winter. I picked up many a cold virus over the years. Airplanes today also host a variety of interesting microbes from all over the globe that innervate our immune systems.  Supposedly cabin air is no longer filtered as efficiently as it was when smoking was permitted.  It might be a good idea to don a face mask before boarding.

Pretzels were never served on the bus.  If one wanted to eat, it was necessary and healthier to bring a snack, or better still, an entire meal from home.  Hint, hint!

2015
"Air Whatever" takes us to exotic and not-so-exotic places fast and almost always, safely. That's a good thing.  Yet I dream of a day when airlines might once again make the flying experience comfortable and affordable.  Sometimes it's necessary to look back to innovate.