February 25, 2015
One of life's constants is change and I am presently going through a transition precipitated by me. I finally left my day job.

Subsistence income derived solely from sales of artwork is a rarity for many artists.  Most have other jobs. The up side is that beyond demonstrating extreme versatility, artists are constantly learning new skills and acquiring seemingly unrelated knowledge. Invariably cross-fertilization feeds perceptions and affects creative output.

Like Hindu gods and goddesses with propagating arms multitasking on a spiritual plane, I have soaked up experiences that nourish Mihaly Csikszentmihalyi-like flow and personal growth.  Be that as it may, clots occasionally block the stream of creativity.

In the past, I sometimes felt frustrated, as though there were two of me, one side free, uninhibited (to a degree), and the other side stuck within the confines of business decorum, rules and regulations.


The day job required attentiveness and active listening.  I couldn't let my mind wander.  Switching mindsets as I entered the studio became increasingly challenging. The artwork became smaller in scale and I was compelled to learn new tools that didn't require a change of clothes or set up time (digital apps and software).

I am now free to create at will but remain unsettled at some primordial level.  Adjusting will take time, it's only been three and a half weeks.  I spent the first one painting like a madwoman to meet the deadline for a recent show.  Creativity under pressure is a given once the invitations have been sent. 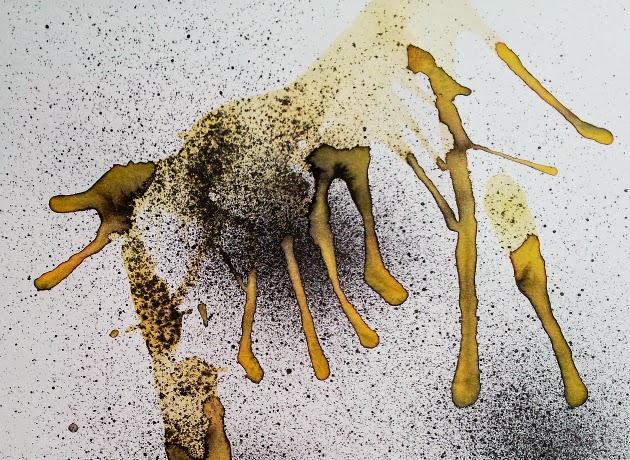 Weeks two and three and a half were spent adjusting to a series of home improvements involving loud noises, spreading sawdust, and shopping for upgrades. I also kept coming across other things to do (not art related) that involved sorting, organizing and cleaning.

A couple of nights ago, I took the bull by the horns and played with a new mouth atomizer.  I ended up going to bed way too late because it was so much fun. I blew hard, sometimes nothing came out, at other times it the ink or paint flew everywhere.  Still have to get the hang of it but interesting things are beginning to happen as I combine mediums.


I guess it's all about being patient as I realign the egg yolks!