October 05, 2014
So many years have gone by. People are tired, closing up shop, retiring. This must mean that I have been making art for quite a long time...

When I first became part of McIntyre Gallery's stable, their direction seemed wild and funky, quite unlike the fare I saw at the time in Quebec. Then slowly, after ten years or so, the artwork shown began to change, became more traditional, most likely adjusting to a changing clientele or global political sensibilities.

As the owners prepared to return the paintings I had on consignment, they informed me that they were interested in purchasing one last work. "Camouflage" stayed behind in Saskatchewan.

Early in my career, parting with what I had created was difficult. My works weren't just a commodity to sell, they were akin to babies that had grown within me. It was necessary to change the message that was on replay in my head. I made a conscious decision to view those who purchased my work as adoptive parents who cared deeply for the images they chose to live with. The passionate connections buyers made with the work were fuelled by their own history, which was often unfathomable to me.

What originated in my psyche went through a strange metamorphosis at the receiving end, somehow transforming into universal archetypes.

Now how cool is that?

Last week, I picked up most of the drawings I had at Galerie Harwood. Like a reunion with old friends, I embraced the experience with joy and let waves of the past wash over me. It's a revelation to see my work again after it having been on consignment for long periods of time. The images are loaded with secretly coded memories that stir up old emotions.

The drawing below reminded me of fun times I had with fellow artists during a model drawing workshop. We always liked to add interesting props and on one particular occasion, had the model pose in rubber inner tubes. 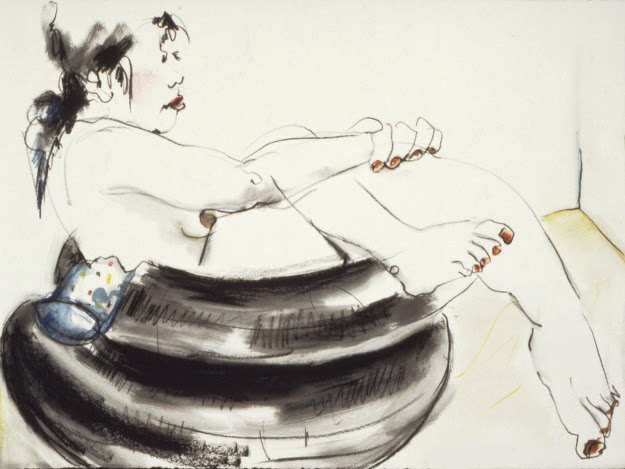 This drawing led to a painting, which is presently on consignment at the Artothèque de Montréal.

The environment surrounding the figure has changed. She now sports a blue tinge and bobs within an equally blue ocean on a yellow inner tube as two rubber duckies float by. Pollution is not always ugly on the surface.

I have yet to put the work I picked up in storage. It rests in my studio amidst new paintings and sketches. I imagine the pieces conversing, exchanging stories about what was said by those who viewed them.  Ah to be a fly on the wall.