August 01, 2014
Ultrasounds of unborn babies are intriguing, a peek into what was previously unseen and only imagined. Technology allows us to view amazingly accurate images of tiny individuals who are soon to be among us, entities that exist in another world.

Emotions of peace and security overwhelm, but then again, am I merely projecting? Could it be that I, at a cellular level, evoke a time when I was floating in an egg shaped bag? Did I feel more protected then? Warmer? Snug?  Were sounds muffled and soft?

I must have had some trouble moving around in there because I came out folded up like an accordion. Mom said it took months for my head to stop flopping backwards. It had settled early into an awkward position. You'd think that a head stretched back for so long might yield an Audrey Hepburn neck, but nope!  The prolonged extension of a body part does not automatically trigger its growth or contribute to elegance.

I recently had access to ultrasound images of a growing baby that were taken at different times during the pregnancy. The most recent one, at barely 8 months, was incredibly well-defined.

Fetus, I feel like a spy
as watching waves probe.
Enjoy your moment of quietude
for blazing lights await,
and soon you will hear yourself cry. 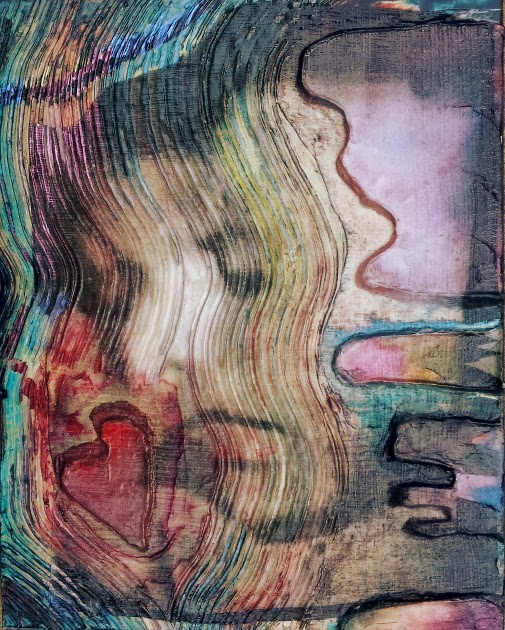 I reproduced the image on a laser printer to use as a starting point for these paintings. One can't work with ultrasounds without having a deluge of emotions cascading through the psyche. The world is a scary place with no sacred womb to shield humanity from nasties who want power over others or everyone to think like them. Life isn't gentle.

The low relief piece above was created by applying modelling paste, thick gel and paint to a wooden board. After the surface was dry, I glued an acrylic skin of the image over the prepared surface and applied more colour.

In the one below, I spread glass bead gel all over the board to create an interesting ground and transferred the image directly over the medium once it had dried. As I was using a cheap "dollar store" brush to apply colour, some hairs dislodged and became stuck in the paint. I liked the effect, so rather than remove the hairs, I left them where they were to complement the vein-like lines I had planned to include anyway.

Art like life, tends to weave in the unexpected. 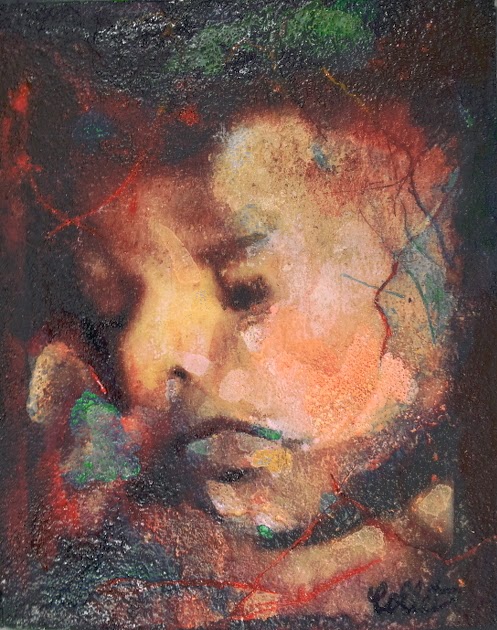