I was about to clean the deck around the above-ground pool when I discovered a tiny bat lying under a toy. Even under close scrutiny, it didn't budge. I headed towards the patio door and called to my kids, "Come and see this!"

I imagined myself giving an impromptu mini science lesson about bats but alas!  T'was not to be. When I turned to admire its exquisite folds it was nowhere to be found. The smart little thing had faked being dead until it could get away. Never underestimate an animal's survival instinct.

The Second Time: (This week)

I came out the front door and on the stoop was a snail, the first "complete" one I have ever seen. Normally I find them curled up within the recessed ovals of a metal plate under garlic butter and melted gruyère cheese.

The earthy colours of its shell echoed those of the surrounding stones. I watched for a few seconds, waiting for some action, but it wasn't moving. I turned towards the door and called my companion to "Come and see this!" 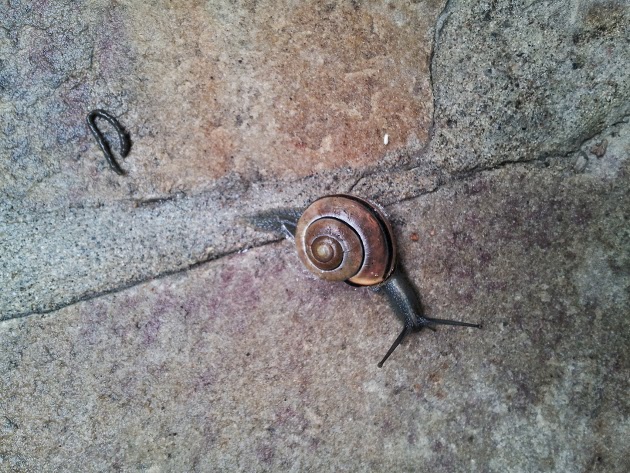 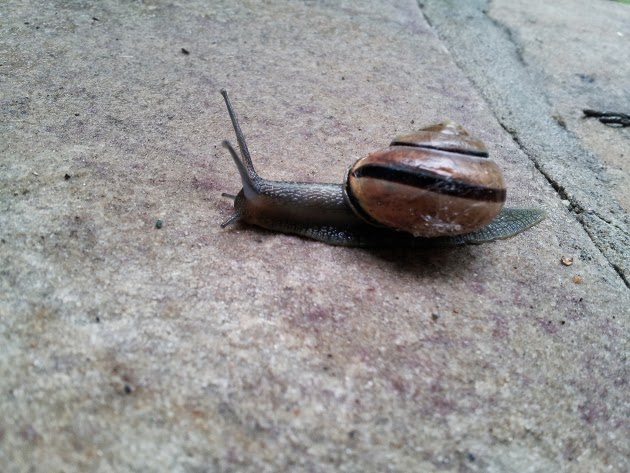 Interestingly, this tiny creature was quite unlike the drawn cartoon versions one usually sees where the shell appears to be attached in an upright fashion onto the body. After a bit of research, I discovered that that there are many varieties of molluscs. Some are more turtle-like than this one who carries its shell on a slant.

We were perplexed. How had it managed to make its way onto the stoop? There was a rather high stair to climb.

A tentacle suddenly twitched and it began to move, sort of..."at a snail's pace", a term which I now truly understand.

It probably took hours for it to get anywhere (assuming it had any kind of plan).

I didn't have the patience to watch.


According to the Government of Canada, snails are hermaphrodites that have a foot under their stomachs (gastropods). This one may be the first of many that are about to invade my garden. My mind is now in science fiction mode. I have visions of hearing crunch, crunch, crunch as I walk over thousands to get to my car.

Oh well, not all is lost. "Stomach Foot" did provide creative fodder.