ART:  Everyone knows what that is.
OOLOGY: According to Wikipedia, the study of bird's eggs, nests, and breeding behaviour.

After completing the funky digital sketch above, I was inspired to paint a fried one and in so doing, discovered a few things.

A sunny side up egg yolk is not entirely yellow. It's a bit rusty brown in places and has whitish light reflections that make it look shiny. The colour of the feed has a bearing on the colour of the yolk. The hen that laid this one ate heaps of corn. 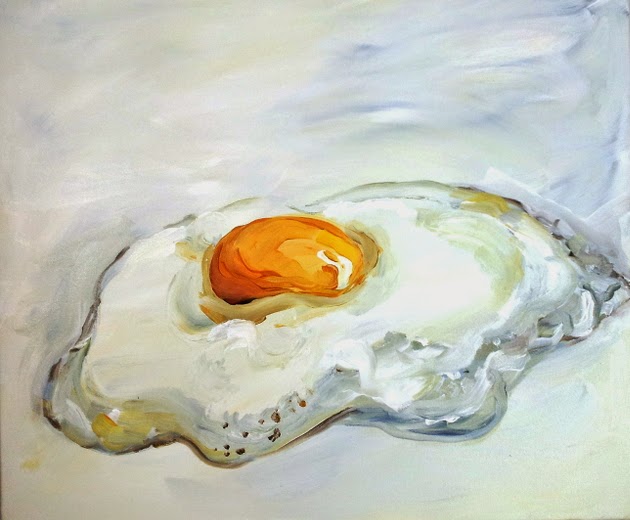 Neither is the white of a fried egg white. I mixed Titanium White (a.k.a. "tit white") with Paynes Gray and Indian Yellow Hue in varying proportions to achieve assorted shades of white. Some areas are gray, others green but when the eye scans the egg as a whole, the shape appears white.

Van Dyke Brown and Raw Umber helped  create those little air holes that appear on the edges of an egg when it has been cooked a tad too long. The perimeter can become a crispy bronze with over cooking, but I painted a Goldilocks version, fried just right!

After the egg was done (figuratively speaking), I planned on reinterpreting the character in the digital sketch using the egg as a blanket or bedspread. I deferred this idea because the canvas was small and I felt the concept would be more successful painted on a much larger scale.

The more I looked at the egg, which by now was resting on toast surrounded by lettuce, the more thoughts of "breakfast" swirled around in my head. I stopped working on the piece for a few days to reflect on the very nature of eggs.

Researching a subject invariably leads to more art making ideas. For instance: unfertilized eggs are also known as wind-eggs. Imagine a painting of wind-eggs! Now why does a whiff of sulphur come to mind? Eggs we fry up are generally unfertilized, but every once in a while, a fertilized one ends up on our plate.  What if a being of sorts actually popped out to say "hi"?

These musings lead to a moment, not quite AHA!, more like "mmmmm".

In my final image, the bald eagle is a hungry and very intense-looking bird of prey who happens upon a classic morning meal. He stares at it with some apprehension: not a fish, yet it gives off a seductive aroma. Now why is there something disturbingly familiar here?