October 12, 2013
About twenty years ago, I went on a sailing tour off the shores of the Dominican Republic. For over an hour, the clipper rocked over towering waves and seemed on the verge of flipping over. I was frantic at the possibility of becoming sushi for sharks! Fear wasn't my only companion, motion sickness, also reared its ugly noggin...(and to think that as a teen, I once contemplated joining the navy. What a rude awakening that would have been.)

I liked the uniforms. 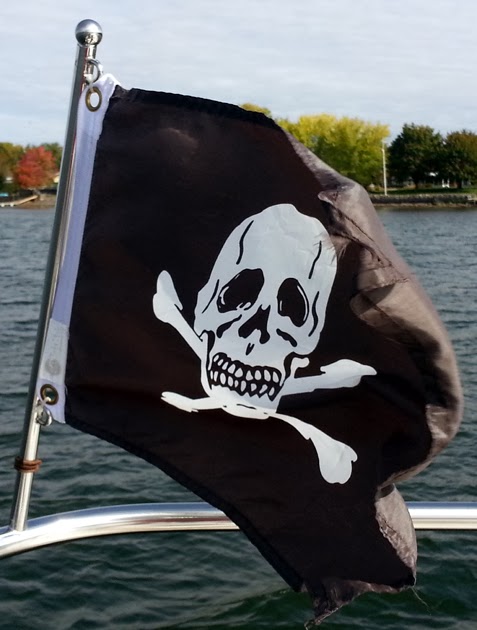 A friend of mine invited me to go boating (sans sail) on La Rivière Richelieu last week. No ocean waves awaited us, the weather was cloudy but looked promising. A Jolly Roger flew off the bow which incited me to burst into song, "I am the pirate king!" (most likely to the chagrin of everyone aboard).

I picked up an interesting tidbit of information on this trip: it's okay to have the skull and crossbones flying in Canada, but not  in the U.S.

What is it about pirates that excites us so? Why should thugs inspire novels, musicals, movies, TV series...(who can forget Long John Silver played by Robert Newton?)  Drunks in black eye patches with rotten teeth, sporting daggers and spewing "hardy har hars" would most certainly alienate me if I came across them in a local bar!

I bought Treasure Island for my son when he was a little boy because I was blown away by Ralph Steadman's illustrations. Fine, exquisite, lively lines extend from his fertile imagination to create the most frightening of images.


My son no longer has the book, I do.

No pirates that I know of have ever haunted Quebec waters but then again, I could be wrong. 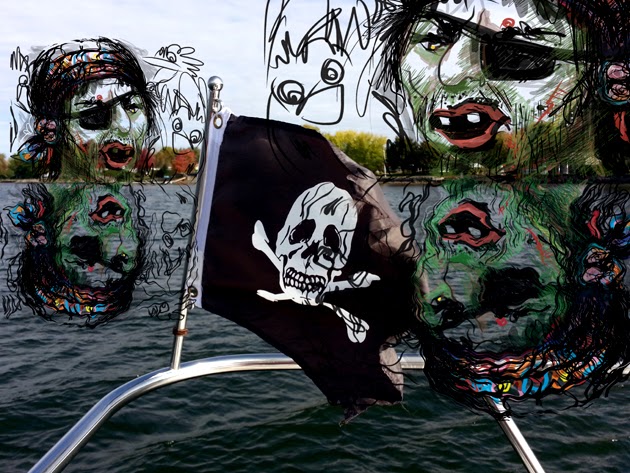