October 21, 2013
CLARIDGE, Charles Bronfman's corporate art collection will be sold by auction in Toronto via Waddington/Joyners.  The entire collection is being dismantled over a period of one year or so (in 3 sales). My painting "Des Christines le fun" (aka "La salle d'attente" or "The Waiting Room") is part of this collection and coming up for sale in the first round on November 6th. Proceeds will benefit Historica Canada. The catalogue can be viewed online at http://lnkd.in/b66Hmjq.

I have mixed feelings about the sale because this exclusively Canadian collection is rather unique.

I remember when Franklin Silverstone, the collection's curator, came to my studio. He was very open-minded, gracious, and enthusiastic about my work. At the time, I was inspired by triad goddesses, deeply involved in symbolic research, and producing humorous versions of the virgin, mother and crone.

Christine, my favourite model, was the spark for many works. I loved doing gesture drawings of her and a series grew from a ragout of quick drawings and  life experiences.

The mixed media drawing on the left was partly triggered by a section on Weird Sisters from Barbara G. Walker's Woman's Dictionary of Symbols and Sacred Objects. She writes: "Shakespeare's three witches were called Weird Sisters after the Saxon trinity of Wyrd, the Three Fates..." Visual wordplay (Weird, Word, Wyrd) highjacked my brain. The Energiser Bunny channeled through me as I produced more work. Ideas evolved and I found myself becoming increasingly enthralled by those quirky humanoid stabilizers known as  feet. 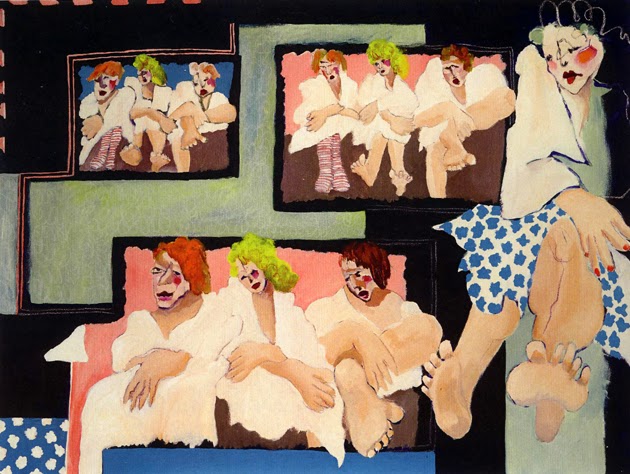 This painting of repeated weird sisters is the version that was purchased by Claridge in the late 80's.

The image also appeared on the cover of Grain Literary and Visual Arts  in the Fall 1989 issue as well as in an exquisite birthday catalogue prepared by Franklin Silverstone for Charles Bronfman in 1991.

Like a leaf in the wind, I can't help but wonder where the painting will land.  Hopefully on dry terrain.