LOST IN A DARK VIRTUAL HOLE

September 08, 2013
Information technology has had a major, and for the most part beneficial, impact on our lives.

Before the advent of email and computers, I grew a hefty callous on the third finger of my right hand by writing to approximately 21 pen pals throughout the world. There was something surreal about the whole experience. On a practical level, the flow of ink across blue, nearly transparent paper allowed me to improve my penmanship, grammar, and poetic expression. On an emotional level, every letter received was a gift of learning.

Exotic envelopes arrived on a regular basis from far off lands, mainly England and Germany. My hands trembled as I read news from friends I would never meet. We only knew each other via black and white photographs.

Things have changed.  With email and social media, we share information immediately but there is a cost. The tactile, sensual sensation of opening a letter, smelling its contents, unfolding sheets of thin, fragile airmail paper is replaced by beeps and bird songs. There are no more beautiful stamps from around the world cancelled with parallel zigzag lines to admire.


Forgive me this moment of nostalgia. I have nothing but happy memories of my pen pal past, even though some exchanges did involved deceptions. A young Englishman tried to fool me by sending over records that he claimed were his. He stuck white paper over the middle circle of forty-fives (clumsily filled with information written in pen) and wrote that these were his original demos.

Old gullible me believed him for a while; why would anyone lie??? I smile when I think of how naive I was.  I had so much faith in the human race.

In all fairness, this untrustworthy connection did introduced me to British music long before it became popular in North America, and I listened to the Beatles way ahead of anyone in my home town.

Present-day experiences often get me thinking about the past, and these particular musings were brought on by an email I never received. Things are expected to work smoothly at all times with my art biz but occasionally technology fails me.

I applied to a call for entry at the Artothèque de Montréal for a drawing show a few weeks ago.  Exhibitions of this type (pure drawing) don't come up very often, so I was quite excited at the possibility of participating. A decision from the jury was expected between the 16th and 20th of August but I never heard a thing.  I assumed (big mistake) that I had not been accepted.

A few days later, I received an email reminding me to bring my work in the next day. I was  flabbergasted and shocked, and proceeded to quickly send an email saying that I had never received an answer stating that I had been accepted. None of the submitted drawings were framed for obvious reasons.

The next day I received a phone call informing me that yes indeed, I had been accepted.  They were flexible when it came to framing.

A last minute rush had me recycling a piece of glass and board. I spent  fifteen bucks on silver bulldog clips and delivered a cleanly presented piece although not as beautifully framed as I would have liked.  Lesson learned?  Always follow up and NEVER assume anything.

Here is my contribution: 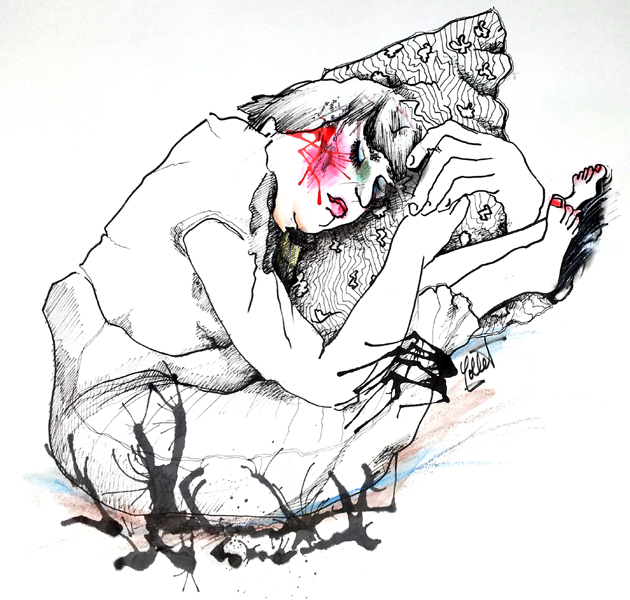 Hope you can make it to the show!