This is becoming more of a nature blog than an art blog. However, I believe in cross-fertilization and sense that at some level, these observations will eventually feed my creativity.

Some rather eccentric animals live around here.

I mentioned in a previous post that the Ottawa River is slowly creeping over our grass. Ducks think this state of affairs is akin to Shangri-la. These two, (a male and a female), are moving into the new pond created inside the limits of our property.  Methinks there just might be a bunch of duckings following mom around in the near future.

But there are other unusual happenings; strange sounds emanating from who knows where? Taka, taka, taka, taka, is something wrong with our electric heater?  My partner goes outside to  seek out the origins of the racket. 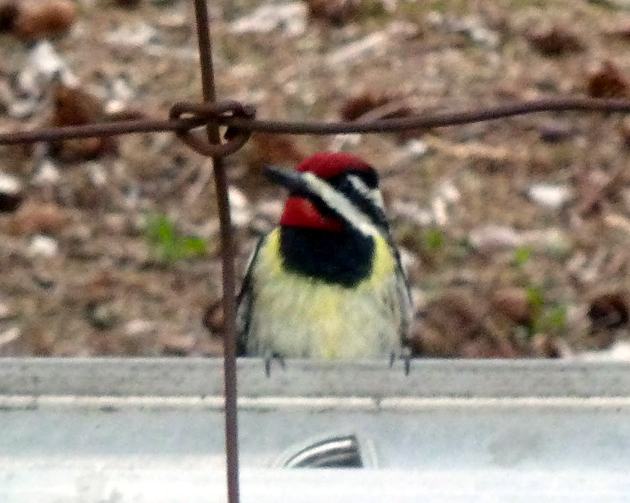 Our neighbour's metal ladder leans up against a wire fence. Yes, a METAL ladder. A beautiful yet obviously looney woodpecker, (with bright red markings on his head), taps his beak as hard as he can on the ladder. Now according to a YouTube video, this type of behaviour is quite common. Loud pecks are more likely to attract mates. Hmmmm, maybe not so wacky after all.

Arthur, the big yellow cat who supposedly lives next door, (actually the world is his oyster), takes on a hunting stance, rushes towards the fence, and shoos the bird away.