Sometimes a phrase in a book will strike me as particularly effective in conjuring up visual imagery. I tell myself, "Oooo, I have to remember this one!" but unless I make a note of it right then and there, the image gets lost in thought trash. I've found that keeping a little pad of arrow "Post it" notes near me as I read does the trick!

Last year, a friend lent me a book by Joan Bodger called The Crack in the Teacup (The Life of an Old Woman Steeped in Stories). In one anecdote, the author describes her mother as having "a medieval nun's horror of the crotch."  I couldn't stop giggling. The phrase evoked memories of my hometown, which was a rather conservative place in the old days.

Everyone except my father seemed to be wearing blinders. Very few had an open mind in my neighbourhood. It felt like the dark ages; "la grande noirceur" permeated the pores of the people around me.  I still get a strong dose of angst when I reflect on my early teen years there.  Moving to the big city of Montreal was one of the most liberating experiences of my life.

In reality there's no such thing as freedom, it's all a matter of degree. To quote Zimmerman, "You gotta serve somebody" and perversely, repression often breeds creativity.

I like to close off a small compartment in my mind when I want to serve myself. Imagine an old fashion card catalogue drawer in a cavernous library labelled "think whatever you like." I flip through the small white rectangles occasionally punctured with typing. "A" always seems to pop up a little higher than other letters. Some words are written by hand in blue, black or red ink. I pick a card, any card, and walk over to a stack of dusty books.  My fingers flutter over the canvas bookbindings. I slowly pull out a thin one, feel the paper, study the font, read a sentence or two, and smell the odour of those who have previously turned the pages. Occasionally there's a grease stain left behind by a tired student who has just gorged himself on pizza.  Absolute paradise!

I recently took a workshop on faux encaustic techniques. We tore up pages of old books to add a layer of visual texture to our work.  If books are to become obselete, then they must meld with art. Words will inspire, torn pages convert into a jagged line, and I will joyfully keep searching for medieval nuns. 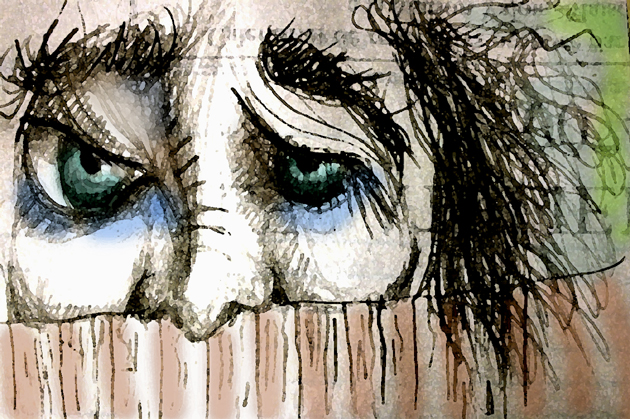