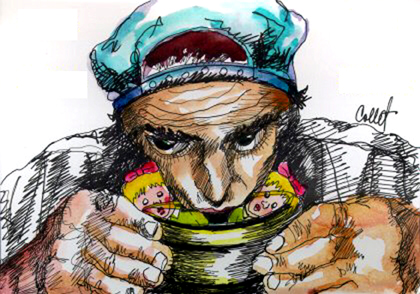 Arthur Koestler coined a term called bisociation; a method of invention where two things are connected that have never been linked before. 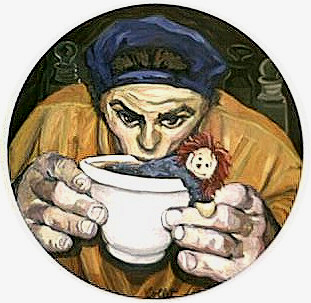 I went on a trip to Quebec City with a friend of mine.  He ordered a cup of coffee but the coffee didn't come in a cup, it came in a bowl.  The warm, frothy liquid looked delicious and I took a photograph as he held the bowl to his mouth. I felt compelled to reinterpret this picture, something about it brought forth unusual associations in my mind.

I completed the sketch above after studying the picture. My friend drank the coffee carefully, took precautions not to burn his mouth or perhaps even his cheeks.  His intense, focused gaze seemed almost malevolent. For some strange reason, I decided to add two small dolls in the soup bowl to  contravene this fleeting impression.

I  reinterpreted the sketch in an acrylic painting and became totally enthralled with the hands.  I exaggerated their proportions, which along with the gaze, made the figure quite imposing.  The composition was challenging because I chose to paint this on a round canvas.  Instead of two dolls, I chose a Raggedy-Ann doll.  Is there a more joyful doll in existence?

The contrast in mood between the main figure and the doll creates tension.  A doll that lies in a soup bowl while someone is drinking the soup is an incongruous scenario; dolls symbolize humanity ergo the painting becomes unsettling.

Finding relationships between normally alien domains is fundamental to creativity and can lead to exciting discoveries.  I force fit a doll, soup, and a man, voilà....a work entitled "Seasoning".