THE UNDERWORLD IS A BRAIN SPA

May 25, 2012
In Greek mythology, the souls of the dead end up in the Underworld.

the "half dead" visit the Underworld temporarily. Who are they? Folks with the blahs.

They drift down willingly to clean out the melancholia that adds weight to their hearts. As they hang upside down like bats; blue thoughts pool in their heads and fall as rain-tears to replenish streams and ponds.

The Underworld is a Brain Spa. 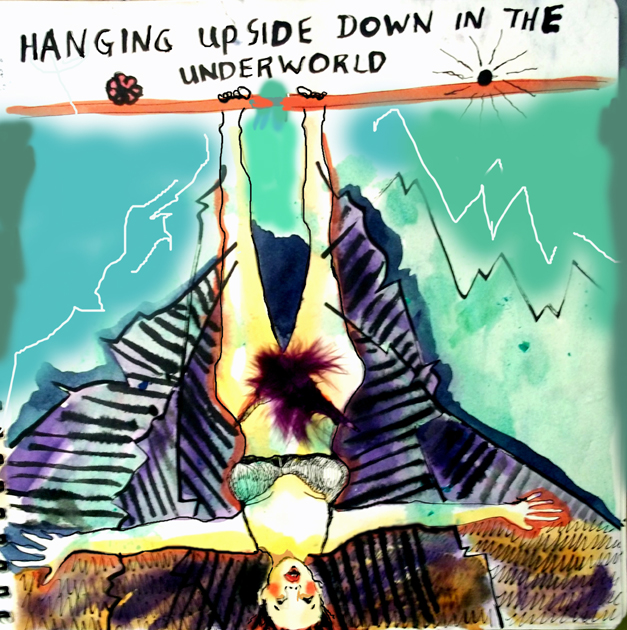 After a few days, the dead parts of the "half dead" dry up and shrivel. The "quarter dead" return to the Upperworld to work, play, and function.

Forces from within and without eventually rehydrate those dried up bits. Buried pain grows heavy and another spa treatment becomes necessary. The cycle repeats itself. Time to return down under, and I don't mean Australia.

The living also visit the Underworld, especially when they have a migraine, indigestion or feel generally tired or out of sorts. It's a great place to rest, recuperate, cocoon. No one bugs you because no one wants to be bugged.

The Underworld Brain Spa is an establishment where there are no fluffy white bathrobes or fake smiles from the staff and no new age music. No one paints your toenails, picks at your pores, or tells you that your wrinkles need fillers.  One hangs alone in the Underworld and that's a good thing.

"Like a dog that has gone for a swim in an icy cold lake, climb up the tilted land that borders the water, then shake, shake, shake your body until the sprinkles of your funk splatter away .