April 06, 2012
The multimedia group exhibit that I participated in at the Embassy of Canada Prince Takamado Gallery was extended until March 26th, 2012.  Unfortunately I couldn't make it to Japan for the show but at least my artwork did.

It had always been a dream of mine to go Japan, which finally came true about 15 years ago.  I couldn't believe my luck!

I stayed in someone's apartment for a week in Kanagawa-Ken.  My view of Mount Fuji from the living room window had wires running across it (either phone or electrical). The following week after a ride on the Shinkansen, I ended up in Kyoto and visited temple after temple.  I rode a black bike everywhere.  It had no gears and reminded me of the one I had as a child except mine had been blue.

Deer ate food that I had stuffed in my pant pockets in Nara, and I swear that I felt ancestral ghosts blowing in my ears at the Tōdai-ji complex. 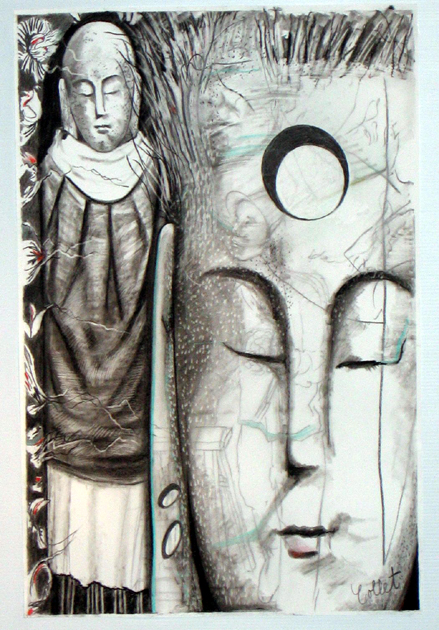 Little statues wearing children's bibs and clothing were especially moving and they kept popping up in unexpected places.  I heard they were meant to help ill children recover, or to honor and protect children that had died. As a mom, I couldn't think of anything quite as devastating as having to deal with a critically ill or dying child. I completed this charcoal and pastel drawing upon my return to Montreal.

While in Kyoto, I also participated in an art workshop. A group of us sat around a table with our sundry tools while our honorable instructor asked us to copy a brush painting of a chubby male. I had her giggling at the end of class when I starting distorting the man's foot on one of my many interpretations. It grew to abnormal proportions. What can I say?  I couldn't help myself.

I did an acrylic work based on those little brush paintings adding another figure. The painting below of the rotund little man is amusing while the drawing of the statue is serious. I seem to oscillate from one mood to another. In one I use classical techniques, the other, expressionistic. 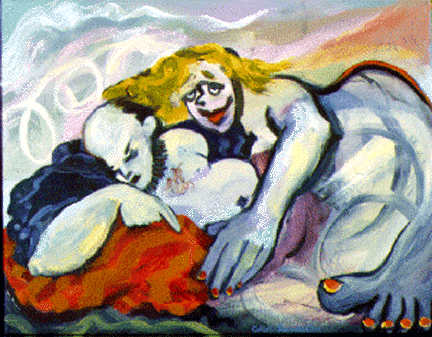 It is what it is.

Japan is a country located in the ring of fire. Beside my bed in that little apartment with Mount Fuji in the window, I discovered a bottle of water, a whistle,  and a flashlight (in case of an earthquake). The works that I made for the the exhibition Rebirth: Reflections for Japan post 3/11 represented the beauty of Japan, the strength of its people, and hope for a better future.


These are the works that I created for the show: