LIFE IS A BATTERED JOURNAL

April 22, 2012
Keeping a journal is an activity that many books on creativity encourage. They are usually written on a daily basis but I prefer not to stress myself out with the process. If I don't feel like journaling for a while I don't worry about it because at other times, I can go like gang busters for months, even years!  I find that I generate more ideas if I keep a combo version of a diary that includes not only words but images as well. 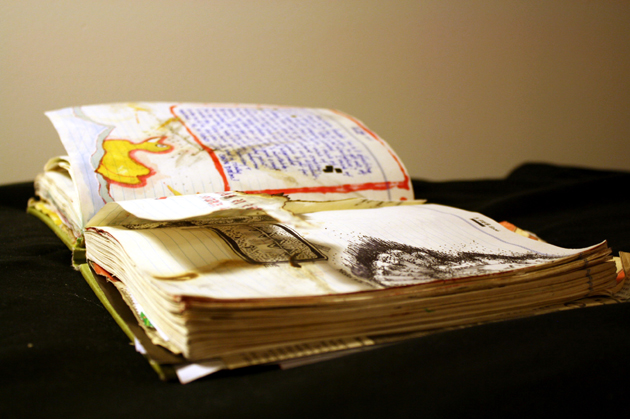 A line, colour, shape can enhance or destroy the pristine beauty of the blank page. I have amassed various methods to move beyond the initial hurdle.

This particular journal did not begin as a precious new sketchbook. Rather, it was a hard cover log that belonged to my father. In it he kept accounts of a house that he had sold.  Strangely, and for reasons known only to him, his entries were not on the first page of the book. He chose an arbitrary page. I decided to pursue his approach and avoid a chronological journal.  Dates are not sequential, a 2011 entry can appear before one dated 2005.

My journal is not a thing of beauty, it's old, worn, bashed, battered and bruised.

Before I began to write and draw, I performed a preliminary ritual.  I soaked part of it in water then left it to dry so a few pages would curl. I threw it in snow, stained it with coffee, tea, paint; walked on it, dipped it in mud, scratched it, tore it, and partially burned a page or two. I glued things inside such as articles from newspapers, pictures, or bizarre doodles that mysteriously surfaced as I talked on the phone. 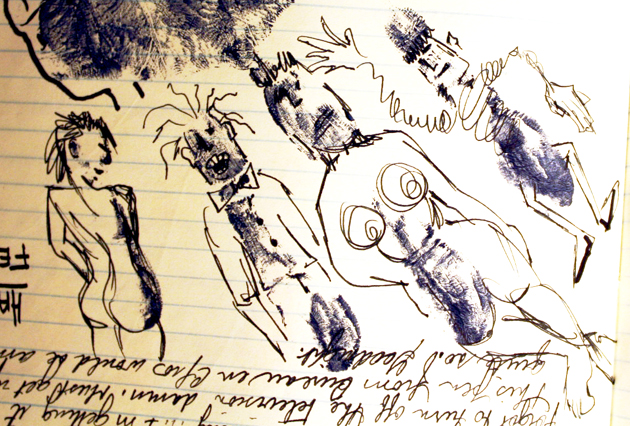 Once I had something with spirit, I began to experiment, record feelings, actual events or impressions using either markers, paints (acrylic or watercolour), ink, pen, pencils, whatever I happened to have at hand!

One of the wonderful things about the paper in this journal is that whatever I produce often bleeds on the reverse side. New images evolve from what seeps through. These are  definitely gifts from the deities.